Actually, I asked Mary to tells us about her version of vampires and how the Meiers Corners vampires are different. As a longtime fan of all things Meiers Corners, I was delighted with her post.

Thank you, Nancy, for having me here today!
What makes your vampires different from the others out there?
Keeping it real.
I can’t claim to have read every vampire book or seen every movie or show. But there are three ways I know of to “make” a fictional vampire—physically (like the plague in I Am Legend), magically (like the witches’ spells in The Vampire Diaries), or morally (divinely cursed like Dracula). Mine are the physical variety. The underlying mechanism has yet to be revealed, but there’s one noticeable aspect that sets my v-guys apart.
My vampires don’t drink blood for their stomachs—they drink it for their veins.
Like humans who can’t make their own blood, my vampires must have regular transfusions (taking their transfusions by mouth).
I like this a lot (especially for romance) because it’s hard to have a real relationship with someone who looks at you as a giant barbequed chicken. My humans are donors, not dinners. Even better, vampires only have to drink about three times a month (just often enough to replace dying red cells).
Now, I do have to say that my vampires have many similarities to those out there. They’re strong, fast, rich, highly sexual and fall in love hard with one person. There’s a group of savvy warriors united by the mysterious Ancient One to protect humans.
But real physiology grounds my vampires, no matter how whimsical the plots get. The blood they drink goes directly into their veins instead of their stomachs, which is frankly more authentic to me because the stomach digests blood. Mini-rant here—feel free to skip to the next paragraph :). That’s one reason I have a problem with turning rituals where the human drinks blood. How effective can blood be, churned up with gastric acid? Assuming it stays down, that is. In humans, blood is an emetic—drink enough and you, um, you know. Email me if you don’t :).
Of course, because my vampires don’t use blood for food, they have to get their energy another way. It’s not revealed yet, but there are indicators they get it from being buried in the soil (perhaps like plants do) honoring the “native soil” needed by Dracula, and the vampires-sleeping-in-graves legend.
The physical differences also have a real social impact. Those who successfully make the change keep their human intellect and morals: silly, smart, wise; good or bad. So on one hand we have the Iowa Alliance living in harmony with humans, and on the other we have the Chicago Coterie trying to take over the world. Some vampires don’t make the change successfully. They lose what makes them human, becoming pure vampire hunger uncontrolled by their rotting human brain. There’s a nice tension between the good guys protecting humans, the bad guys using them as minions, and the rogues mindlessly hunting them.
Lastly, some vampire characters are developed ignoring popular lore. Lore may not be real, but popular means a lot of people understand vampires in terms of the legends. I try to honor all legends that are physically based. My vampires are hurt by silver. They get a buzz from running water. Sunlight fries them. They do have reflections, but no reflection is part of the divinely-cursed vampire mythos (no soul). After being undead long enough, they can turn their bodies into mist; longer yet and they can shapeshift. These all have real reasons tied consistently into the physical nature of my vampires. Which will get revealed eventually :) 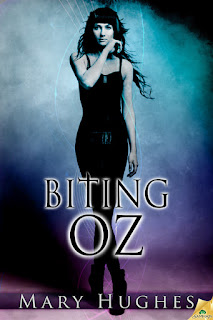 Real vampires do musicals.
Biting Love, Book 5
Gunter Marie “Junior” Stieg is stuck selling sausage for her folks in small-town Meiers Corners. Until one day she’s offered a way out—the chance to play pit orchestra for a musical headed for Broadway: Oz, Wonderful Oz.
But someone is threatening the show’s young star. To save the production, Junior must join forces with the star’s dark, secretive bodyguard, whose sapphire eyes and lyrical Welsh accent thrill her. And whose hard, muscular body sets fire to her passions.
Fierce as a warrior, enigmatic as a druid, Glynn Rhys-Jenkins has searched eight hundred years for a home. Junior’s get-out-of-Dodge attitude burns him, but everything else about her inflames him, from her petite body and sharp mind to what she can do with her hip-length braid.
Then a sensuous, insidious evil threatens not only the show, but the very foundations of Meiers Corners. To fight it, Junior and Glynn must face the truth about themselves—and the true meaning of love and home.
Warning: Cue the music, click your heels together, make a wish and get ready for one steamy vampire romance. Contains biting, multiple climaxes, embarrassing innuendos, ka-click/ka-ching violence, sausage wars and—
shudder—pistachio fluff.


Having enjoyed every visit to Meiers Corners, I look forward to meeting more of the quirky residents and the hunky, hot vampires who love them. this series bring a whole new meaning to hot stuff!!!