Today's post is a Book Blast for The Healer's Rune, a Fantasy by Lauricia Matusk available from Brimstone Press. As a Book Blast, there is no interview or guest post. There is a blurb of the book and an excerpt, and I will post the author's bio for you, as well as the participating blogs on the tour. 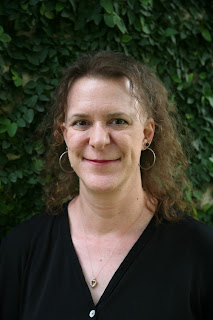 Lauricia Matuska has taught high school literature and creative writing classes for more than ten years. She first discovered the realm of fantasy by traveling with Lucy through the wardrobe to Narnia. Since then, she has established dual-residency between that world and this one, and she currently serves as an ambassador to contemporary youth and young adults. The Healer’s Rune is the first novel in her Ceryn Roh trilogy.

Blurb for The Healer's Rune 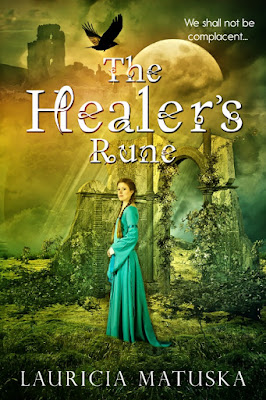 Three hundred years after a great war shattered the Council of Races, the warriors of Rüddan have all but eradicated their cousins, the faerie Aethel. In so doing, they decimated the Dryht sages and enslaved mortal Humanity. Now a voice rises above the chaos and calls her people to rebel. Young Sabine, one of the Human slaves, must learn to overcome centuries of lies and prejudice to forge an alliance between four enemy races. But what chance does she stand to overthrow the Rüddan with her dangerous secret, a secret that threatens not only her own life but the existence of all the races on the planet?

Excerpt from The Healer's Rune

A tall, slender figure stood before the wall, a dim shadow outlined in sharp angles by the golden light.  Prompted by some silent cue, it stepped into the light and seemed to shrink, as if walking away.  Suddenly, it disappeared, and the yellow light began to fade.  Before Sabine knew what was happening, the glow winked out so abruptly that bright spots danced through her vision.  She waited for her eyes to adjust to the darkness.

When she could see once more, the wall looked normal, each brick placed upon another in its ordinary manner.
Magic!  Sabine began to tremble.

City of Hope and Ruin

Today's post is a Book Blast for City of Hope and Ruin, a Fantasy with LGBTQ romance by Kit Campbell and Siri Paulson. This is available now. As a Book Blast, there is no interview or author post, but there is blurb and excerpt, and a bit about the authors.

The authors will be awarding a $ GC for Amazon or   B & N to one randomly drawn winner via Rafflecopter.

Blurb for City of Hope and Ruin 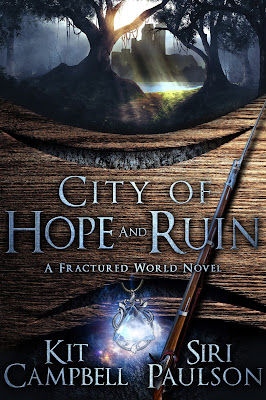 Every night the monsters hunt.

A city that is the whole world: Theosophy and her companions in the City militia do their best to protect the civilians from the monsters, but they keep crawling from the Rift and there’s nowhere to run. Theosophy knows she’ll die fighting. It’s the best kind of death she’s seen, and at least she can save lives in the meantime.

They say the Scarred carve you up while you’re still alive.

A village in the shadow of a forest: Refugees from the border whisper about the oncoming Scarred, but Briony can’t convince her brother to relocate his children to safety. Briony will do anything to protect them. She owes them that much, even if it means turning to forbidden magic.

When Theosophy and Briony accidentally make contact across the boundaries of their worlds, they realize that solutions might finally be within reach. A world beyond the City would give Theosophy’s people an escape, and the City’s warriors could help Briony protect her family from the Scarred. Each woman sees in the other a strength she lacks—and maybe something more.

All they need to do is find a way across the dimensions to each other before their enemies close in.

Excerpt from City of Hope and Ruin

Dean Prosody was pacing in her cramped office when Theosophy arrived. Her bayonet and whetstone lay forgotten on her desk.

"He's not in his quarters, and he took his spear," said the dean, not looking at her.

Theosophy reached into her belt pouch and pulled out her double crystal, tuned to her partners. One side had gone dark, of course, but the other pulsed weakly. She could feel the direction of the pull—toward the ruins—but that meant nothing, surely he wouldn't be such a complete...

"What did you say to him?" Dean Prosody demanded.

"Nothing about avenging Rhetoric?"

"I should hope not," she said. "I was a little busy fighting for my life. With one partner gone and the other just standing there..."

The dean gave her a look, blue eyes snapping.

"What? I let him mourn after. But he still let the third one get away, and almost got me killed. I had to say something."

"There's a reason I'm the longest-serving fighter. And it's not because I'm nice."

"About that, Theosophy...maybe you should consider stepping down."

She opened her mouth, but nothing came out.

"I know you're the reason a lot of these kids are still alive. But you're turning sour. It's not healthy."

Theosophy grimaced. The thing was, staying alive the longest wasn't any kind of mercy. It just meant everyone you used to know was dead.

It is a little known fact that Kit was raised in the wild by a marauding gang of octopuses. It wasn't until she was 25 that she was discovered by a traveling National Geographic scientist and brought back to civilization. This is sometimes apparent in the way that she attempts to escape through tubes when startled.

Her transition to normalcy has been slow, but scientists predict that she will have mastered basics such as fork use sometime in the next year. More complex skills, such as proper grocery store etiquette, may be forever outside her reach.

Siri Paulson writes all over the fantasy and science fiction spectrum, including (so far) secondary-world fantasy, urban fantasy, steampunk, Gothic, historical paranormal, and YA with spaceships. She is also the chief editor at Turtleduck Press (http://turtleduckpress.com/). Siri grew up in Alberta, Canada, but now lives in an old house in Toronto. By day, she edits non-fiction for the government. Her other current passion is contra dance, a social/folk dance done to live Celtic and roots music. Her favourite places in the world are the Canadian Rocky Mountains and a little valley in Norway.

Siri's short fiction and the anthologies she has edited can be found on Turtleduck Press, at  http://turtleduckpress.com/wordpress/2010/11/30/who-is-siri-paulson/ . She blogs at https://siripaulson.wordpress.com/ and tweets at http://twitter.com/Siri_Paulson.