Heat your Nights with Blind Heat I want to welcome Nara Malone to My Odd Little World. I got a chance to read her second book in her Pantherian Passions from Ellora's Cave, and I will post my review following Nara's bio and book blurb and excerpt. I will say it was an intriguing story, and I can't wait to read more in this world.

Nara will be awarding a digital copy of The Tiger's Tale, first in the Pantherian Passions series, and a $10 Ellora's Cave GC to one randomly drawn commenter during the tour, and a GC to purchase a video game targeted for female gamers written by Nara Malone with Orchid Games, Spirit Walkers: Curse of the Cypress Witch to a second randomly drawn commenter.

And now, a bit about Nara Malone. 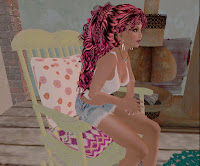 Like the heroine, Allie, in Blind Heat, Nara is face blind and lived with the condition not knowing there was a medical explanation for her inability to remember faces.  It’s a rare and only recently publicized condition.  She hopes Blind Heat will help get the word out about face blindness.
Nara lives on a small farm in the shadow of the Blue Ridge Mountains. When she's not writing, she loves to run, hike, bike, and kayak. Every story she tells incorporates her love of animals, nature, and adventure.
Blogs:
www.NaraMalone.com – author blog
www.Therianverse.com--blog containing interactive content for her books from two series that include therian shapeshifters –Patherian Passions, and Passions Portal.
www.PassionsPortal.com-- interactive website for Shadowling Manor , the setting for the multi-author paranormal series.
Contact:
Nara_malone on Twitter
Nara.malone on Facebook
The interactive world Nara built for Blind Heat is here--http://therianverse.com/naras-worlds/

Today, I'm doing something a bit different. I'm hosting Delilah Devlin's Book Blurb BlitzTour for Fournacopia, her hot new book. Delilah will be awarding the winner's choice of backlisted eBook to a randomly drawn commenter at every stop and a $50 Amazon GC for a randomly drawn commenter during the tour. So now, on with the Blitz.
First, for those who don't know Delilah, here is a brief bio.

Forget the sugar. Send her the spice.

The large, burly cop is exactly the kind of alpha guy that newly minted Domme Aislinn Darby has been dying to tie up and spank. Yet after she puts him through his paces, she finds herself eager to let him take control—something she’s never before enjoyed with a man.

Determined to find out once and for all if she has what it takes to control a scene, she orders him up for one more go. Only this time, she intends to ensure he remembers who’s in charge. She’s even willing to offer a little bribe: accept her dictates, and his reward is her—any way he wants her.

Except when it’s time for payback, it comes with several twists she never saw coming.
Product Warnings: When a male sub decides to turn the tables on his pretty Domme, he calls for backup from his best friends. Contains scenes with m/m/f, m/f/m, f/f, spanking, restraints, and an orgy of pleasure no woman can resist.
Excerpt for Fournacopia (it was very had to pick just one, but here goes)
“There any cameras in this room?”
She gave a curt nod toward a far corner.
He didn’t look toward it. He didn’t give a damn who watched. But did she? “Mistress…Ash,” he pleaded, every muscle in his body alert and ready to act.
She shook her head. Closed her eyes. Then she glanced to the corner and signaled with a wave of her hand beneath her chin for their watchers to cut the feed.
“We alone?” he ground out.
“Completely,” she whispered, her eyes wide.
Was she feeling as desperate as he was? Gus swooped toward her, picked her up by the waist and laid her on the bench. “No more slap and tickle.”
She cupped the corners of his shoulders then glided her hands across his chest. “I’m still in charge,” she said, but without any force behind the words, like she was reassuring herself.
“Yes. You can decide whether you want me or not. But choose quick.”
She wrinkled her nose. “You’re a terrible sub.”
One side of his mouth curled up. “Not really into rules.”
“Funny, I don’t seem to mind a bit that you’re not.”
“Punish me for the lapse…later.”
Her mouth curved. “My pleasure.”
He bent and took her mouth, rubbing away the smile. Her hands framed his face. Fingers cupped his ears then bit into his lobes to hold him back.
He didn’t like the uncertainty causing her eyes to darken. “Need control?”
“I do.”
“I’ll give it. Always. Tell me what you want.”
Her chest rose and fell so swiftly, her breaths came in tiny gasps. “Undress me.”
Is it getting hot in here or what??? Oh, yeah, need more of this one. Be sure to leave an email address where you can be contacted if you are the day's winner.
﻿
Posted by Nancy G at 12:01 AM 38 comments: