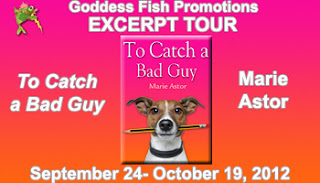 Today is something a bit different for My Odd Little World. Today is an excerpt only tour, for To Catch a Bad Guy, the contemporary romance out now by Marie Astor. Each blog on the tour has its own unique excerpt, so following the tour will provide lots of intersting bits. Marie will be giving away five prizes of custom made jewelry to random commenters along the tour (continental U. S. only)

Blurb for To Catch a Bad Guy
Janet Maple is convinced that her life could not get any worse: her stellar career at the DA’s office ended with a lay off and her boyfriend of five years told her that he wants to be just friends.
When she lands a job at one of New York’s premier boutique investment firms, Janet begins to hope that her luck is finally turning for the better. Not only is she happy with her new paycheck, but things also seem to be looking up on the personal front, as the company’s handsome attorney expresses keen interest in Janet. However, her euphoria is short-lived, as Janet soon discovers alarming facts about her new employer’s business tactics. When her boss dismisses her suspicions as groundless, Janet finds herself confiding to a cute IT engineer, Dean Snider. The closer she gets to Dean, the more Janet is tempted to break her rule of not dating co-workers, but what she doesn’t realize is that everything she knows about Dean, including his occupation and even his name, is a lie.
Dennis Walker is a top-notch white collar crime investigator who will stop at nothing to put culprits away. When an opportunity for an undercover assignment at one of New York’s premier boutique broker dealers comes up, Dennis jumps at the chance, adopting a persona of geeky IT engineer, Dean Snider. While he may be an ace at his job, years of experience fail him when Dennis meets Janet Maple and finds himself torn between his professional obligations and his personal desires. Will he have to choose between his feelings and duty, or will he find a way to satisfy both?
To Catch a Bad Guy excerpt
Dennis Walker surveyed the contents of his closet and reluctantly pushed away his tailored suits. His current persona as Dean Snider, Chief IT Analyst at Bostoff Securities, did not allow for dapper attire. Instead, Dennis reached for a brown Men’s Wearhouse suit in size forty-two regular, while Dennis normally wore forty long. Next followed a shirt of swamp green Dennis had also acquired at Men’s Wearhouse and a mousy gray tie of fabric so stiff that it virtually would stand if one were to lay the tie down on the side. The one thing Dennis refused to give up was his shoes. His feet, after all, were important – he only had one pair for his entire lifetime, so he reached for a discreet pair of Johnston and Murphy’s. Last came a pair of glasses. The lenses were plain plastic, but their purpose was not to correct Dennis’s twenty-twenty vision, but to obscure the blue-gray of his eyes. It was a known fact that people rarely noted eye color behind corrective lenses. For the finishing touch Dennis slouched his shoulders and stuck out his neck. When he looked in the mirror, the transformation was complete: the suave charmer Dennis Walker had been replaced by a nerdy computer geek.
When Dennis had proposed his candidacy for the assignment at Bostoff Securities, his boss had shrugged him off as too good-looking and too suave. In the past, Dennis had impersonated traders, lawyers, company executives, and even aspiring political candidates. Any time an assignment required balls and charisma, Dennis was the ‘go to’ man. Without a doubt, those had been Dennis’s preferred roles, but the Bostoff investigation promised to be a career-making case, and Dennis was a careerist. Sure, he liked catching the bad guys, but he liked being recognized for his achievements even more. His boss was dead set on assigning the job to Peter Laskin. At thirty-five, Laskin was already balding, and the frames he wore had thick corrective lenses in them. Laskin, a forensic accountant by training, was a genius behind the desk, but his last assignment in the field had been over five years ago, and all it took was one hiccup – one slip – for a case to go down the drain. So Dennis took it upon himself to save the day. Not without much struggle, he abandoned his bi-weekly visits to his favorite hair stylist, opting for a local barbershop instead. He purchased the most horrible suit he could find on the sale rack at Men’s Wearhouse, ordered a pair of glasses with fake lenses in them, and worked on slouching and sticking out his neck. When, two weeks later, Dennis showed up in all his geek glory on the doorstep of his boss’s office, the Bostoff case was his and so was the office pool – to Laskin’s relief, Dennis had won the bet. Now he had to prove that he deserved the assignment.
Reminder, Ms. Astor will be giving away five lovely custom made pieces of jewelry along the tour to random commenters. Be sure to leave your email address with your comment. Here is one more look at the prizes. 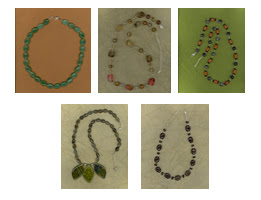