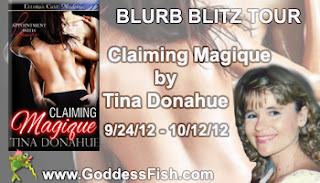 Today it is my pleasure to feature Claiming Magique, the new release by Tina Donahue for Ellora's Cave. Tina will be awarding an ebook copy from her backlist to one random commenter at each stop of the tour, so be sure to leave your email address when you comment. 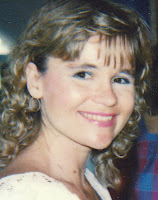 Blurb for Claiming Magique
A man at the center of power. A woman who won’t be ruled. They call her Magique.
Sought out by the District’s elite, she’s no ordinary call girl, deciding who will pleasure her for the evening. Her preference is for several men at once. Games of bondage and submission heighten her arousal and desire to have a strong male take her.
Hunter is only looking for a good time, not a woman who unleashes a hunger so deep it changes his world. He won’t stop until Magique is his alone, a prisoner of his lust, powerless against his growing need for her body and heart.
With this man, resistance isn’t allowed. For this woman, he’ll create a world of sensual delight and yearning like none she’s ever known.
Reader Advisory: Magique’s sensual journey includes some brief ménage and BDSM elements.
Excerpt for Claiming Magique

On the other end of the room was a wet bar. And Magique.
Hunt stepped closer, unable to help himself.
Her back was to them. She made no move to turn around despite David’s nervous throat clearing.
Her hair was glossy and black with blue highlights, worn so long the ends dangled over her ass. From his vantage point, Hunt could see her right leg. She wore strappy gold heels, three inches high. He estimated her to be about five-seven or eight without them. Her dress, a simple sheath, was of an amazing gold material, slightly shiny and so snug she might as well have sprayed the damn thing on.
It wasn’t gauzy lingerie, but it did reveal her every curve.
Adrenaline pumped through Hunt, making it difficult for him to stand still. His mouth went dry.
Her figure leaned more toward a Victoria’s Secret model than the waiflike look of high couture. The dress’s left strap had fallen down, making her seem more accessible, oddly vulnerable. Light glanced off her bare shoulder and arm as she moved, lifting a glass, tipping a bottle. Her skin was an ivory shade, looking delicate and seductive as hell.
He pulled at his tie’s knot, needing to loosen it so he could breathe more easily. The air, so fresh a moment before, seemed suffocating now. His fingers ached. He’d been making fists. To control himself? Damn right.
He longed to cross the room and turn her around so she’d notice him, her expression saying she not only approved, she wanted him more than the others, her actions affirming her reckless desire.
What an intriguing first peek into what is a very sexy book. Can't wait to read more. Remember to comment for your chance at one of Tina's books from her backlist.
Posted by Nancy G at 12:01 AM