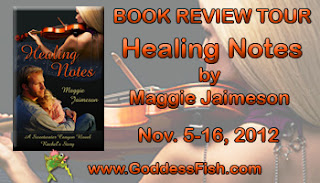 Today is my 'Review Only' post, a follow up to the Book Blast from two weeks ago, for Maggie Jaimeson's Healing Notes, a Romantic Women's Fiction book available now from Windtree Press.

Maggie will award one autographed cover flat to a randomly drawn commenter at each blog stop. In addition, she will award a $25 gift card to either Amazon or Barnes and Noble (winner's choice) as a grand prize to one randomly selected commenter on this tour. You must leave an email address to be entered into any of the drawings. 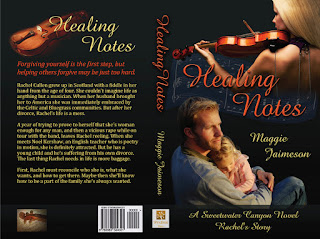 
Maggie Jaimeson writes romantic women’s fiction and romantic suspense with a near future twist. She describes herself as a wife, a step-mother, a sister, a daughter, a teacher and an IT administrator. By day she is “geek girl” – helping colleges to keep up with 21st century technology and provide distance learning options for students in rural areas. By night Maggie turns her thoughts to worlds she can control – worlds where bad guys get their comeuppance, women triumph over tragedy, and love can conquer all.

HEALING NOTES is the second book in the Sweetwater Canyon Series of four books.  The final two books will be available in 2013. 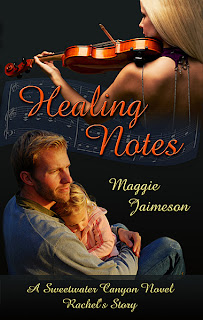 Forgiving yourself is the first step, but helping others forgive may be just too hard.

Rachel Cullen grew up in Scotland with a fiddle in her hand from the age of four. She couldn't imagine life as anything but a musician. When her husband brought her to America she was immediately embraced by the Celtic and Bluegrass communities. But after her divorce, Rachel's life is a mess.

A year of trying to prove to herself that she's woman enough for any man, and then a vicious rape while on tour with the band, leaves Rachel reeling. When she meets Noel Kershaw, an English teacher who is poetry in motion, she is definitely attracted. But he has a young child and he's suffering from his own divorce. The last thing Rachel needs in life is more baggage.

First, Rachel must reconcile who she is, what she wants, and how to get there. Maybe then she'll know how to be a part of the family she's always wanted.

After she hung up, Rachel stared out at the river behind the house. She had goose bumps along her arms. She could listen to his voice for a long, long time. Why did this man intrigue her so much? Was it just because he didn’t seem interested? Yes, that must be it.  He was safe. He had a kid and he wasn’t interested.  That meant they wouldn’t get involved.

All conversation stopped as she entered the room and the women looked at her in anticipation. She had the urge to say nothing just to be difficult.

“Soooooo, who’s Noel?” Kat took the receiver from her. “I liked his voice. Sounded real sexy.”

Rachel took a deep breath and pasted a nonchalant smile on her face. “Remember the little girl at the last concert who wanted my autograph? Noel is her father.”

“I see.” Theresa drew out the word as an invitation for more.

“It’s not what you think. It turns out the little girl wants fiddle lessons. Since she saw us play, she’s gotten it in her mind that she wants to learn.  He had no idea who to call, so he thought he’d call the main number for the band to find me. He didn’t even think I gave lessons, just that I could make a recommendation.”

“Uh huh,” Michele said, a note of disbelief in her voice.

“But he is cute, right?” Kat insisted. “And you are interested, and something could be going on, right?”

“Ah, come on, Rachel.  How can you not be interested in that voice?”

“It’s just fiddle lessons for the little girl.  The girl is sweet. I’m happy to work with her. As for the father, nothing is going to happen. Believe me.”

With well crafted characters, a poignant and touching story, and delightful world building, Maggie Jaimeson has written a tale that draws the reader in and refuses to let things stay the same forever. Healing Notes, the second of her Sweetwater Canyon books, deals with some dark and violent memories, bringing them out to be faced and overcome.

Rachel Cullen wants nothing more than to put the ugliness behind her, and return to her musical friends in Sweetwater Canyon, her band. But a divorce, followed by a violent and brutal rape, leave Rachel doubting who she is, and finds her strength in her fiddle and her music. I found Rachel's inner strength to be both admirable and inspirational: after all she has been through, she can still find hope. I like that she didn't let life keep her from finding love again, with Noel.

After a divorce of his own, Noel is raising his daughter, and living his own life. After a chance meeting at a supermarket, followed by a performance that intrigues his daughter, he asks Rachel to give fiddle lessons to his darling daughter, Claire. He has no ulterior motives where the lady is concerned, even if there seems to be something there.

The cast of secondary characters are as delightful as Rachel and Noel, and I especially liked Claire, a charmer and sweetheart of a child, smart and talented. I enjoyed the interaction between Claire and Rachel, and the slow building of the romance was quietly passionate at times, but never overwhelming.

I recommend this one for those who like second chance at love stories, as well as overcoming obstacles to live and love again.