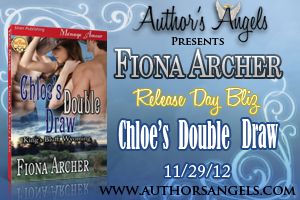 Just a quick post to promo Fiona Archer's debut book, Chloe's Double Draw. Fiona will be giving one commenter on the Blitz a $10 Amazon GC. Be sure to leave your e-mail address when you comment. This sounds like an interesting one.

Blurb:
Chloe Morgan fled to King’s Bluff, Wyoming, to start a new life. With a past that haunts her, the shy schoolteacher must make a choice. She can hide away and protect her secrets or embrace the acceptance of the small community.

Noah King and Flynn Taylor have traveled the world as members of Australia’s elite SAS. They’ve earned scars, both inside and out. Now powerful influencers in King’s Bluff, a town founded by Noah’s ancestors, the men have made a haven from the ranch Noah inherited.

As the two Doms fight to gain her trust, Chloe’s past crashes in on them, threatening their futures. When a man obsessed with her tracks down his prey, nobody could have imagined how high the stakes would go.