My Fair Dork: The Men of Holsum College 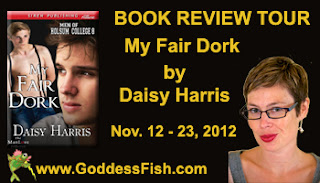 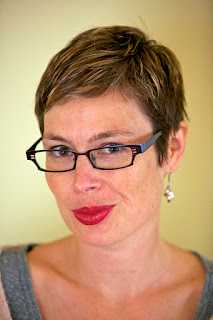 She writes about fantastical creatures and about young men getting their freak on, and she's never missed an episode of The Walking Dead


My Fair Dork (Men of Holsum College 8)
by Daisy Harris 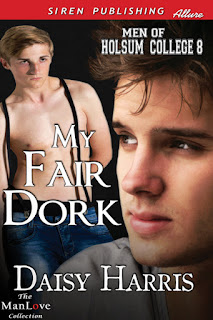 They say a guy can never be too hung. Well, Harold Jacobs doesn't know who they are, but they’re wrong. Socially awkward for as long as he can remember, Harold feels his enormous package is just one more thing to be embarrassed about. Especially once hunky and popular
Owen McKenzie notices it in the showers.

Owen knows he’s bi, but he keeps that secret close to his chest. He likes Harold, and wants to help him shed his dorky image and maybe even find a boyfriend. Still, Owen can’t stop obsessing about Harold’s equipment. And much as he doesn’t want to flip-flop on his sexuality, Owen does want to test-drive what Harold has between his legs.

Their friendship erupts into full-blown lust. But can Owen accept the loss of his golden child status and be Harold’s boyfriend? And can Harold outgrow his insecurity in time to keep the man he loves?

Excerpt from My Fair Dork

He put his hands on the girl’s hips and started to sway into her from behind. They weren't the only people three-way dancing, so it didn't feel too weird. But Harold still kept his eyes closed so he wouldn't have to see Owen staring at him across the barrier of the girl’s presence.

It wasn't bad, pressing against her back. She was soft, and her ass squishy. The round globes of it kept bumping into Harold’s hips. But he wasn't too bothered. She smelled like perfume, and felt more like cuddling into a comfy blanket than anything remotely sexual. Harold was happy not to be worried about getting an erection for once in his life.

The girl leaned back and hooked her hand back behind Harold’s head. Then Owen followed suit. First his hand covered hers, and then Owen eased his hand to the side, so he was cupping Harold’s nape.

And Harold sprung wood. It happened so fast that he was grinding it up into the girl’s butt crack before he even realized what was going on.

He tucked his hips back, and wrenched his head out of Owen’s hold. Harold pulled away from the two of them, but although he wanted to storm out of the party like he had from Eta Xi, he held back. After all, for once he’d gotten a boner while touching a girl. It must have been some kind of miracle.

“Wow.” The girl gave him a flirty wink. She’d never stopped dancing, though she moved away from Owen to come to his front. “Is that a salami in your pants, or are you just happy to see me?”

My Fair Dork is the eighth of Daisy Harris' Men of Holsum College series, and it is such fun to read. The characters are well defined and likable, the world is filled with interesting characters, and the very real problems experienced by Harold are not those usually addressed in a romance book.

Harold's problem seems at first insurmountable. He isolates himself to avoid the teasing and snide comments, all the while fearing he will never experience love or even intimacy because of his size. He hides in plain sight, with baggy clothes and bad posture. Harold crushes on Owen, but believes he is straight, and Harold has know for a long time that he is not interested in women at all.

Owen is securely in denial, knowing he doesn't go for guys...well except for that time way back, when he tried it with a friend. And then there's Harold. After a glimpse of Harold's package one day in the shower, he can't seem to keep his mind off of it, and wonders. And thinks he wouldn't mind getting his hands on some of that, but then, Owen isn't gay...is he?

I love these two, and the subtle dance between them, will they, won't they, will someone end up hurt? When Owen convinces Harold to change his style, I had to laugh at the makeover he got. I loved that Harold became a hottie, and enjoyed the increased attention for him. Does Owen finally hop off the fence and choose to be who he really is? You need to read this to find out, because I am not telling. But I promise you this, there are some really great moments in this, and I really couldn't put it down.