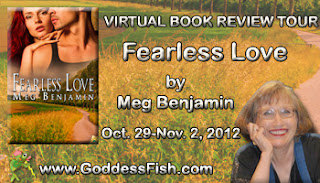 Today, I am happy to post my review of Meg Benjamin's most recent Konigsberg, Texas book, Fearless Love. This Contemporary Romance is book Seven in the series, and is available now from Samhain Publishing. Meg will be awarding a $10.00 Gift Card, winner's choice, for Amazon, Sur la Table, iTunes, or Lush to a randomly drawn commenter during the tour.

Before the blurb, excerpt and my review, here is a bit about Meg Benjamin. 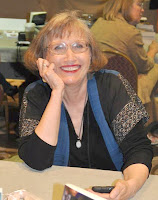 Meg Benjamin is an award-winning author of contemporary romance. Her Konigsburg series for Samhain Publishing is set in the Texas Hill Country. Book #3, Be My Baby, won a 2011 EPIC Award for Contemporary Romance. Book #4, Long Time Gone, received the Romantic Times Reviewers’ Choice Award for Indie Press Romance. Book #5, Brand New Me, won the Holt Medallion from Virginia Romance Writers and was nominated for Book Of the Year at Long and Short Reviews. Meg lives in Colorado with her DH and two rather large Maine coon kitties (well, partly Maine Coon anyway).  Her Web site is http://www.MegBenjamin.com and her blog is http://megbenj1.wordpress.com/. You can follow her on Facebook (http://www.facebook.com/meg.benjamin1), Pinterest (http://pinterest.com/megbenjamin/), and Twitter (http://twitter.com/megbenj1). Meg loves to hear from readers—contact her at meg@megbenjamin.com. 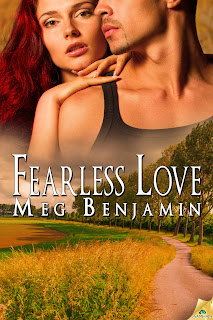 MG Carmody never figured her musical dreams would crash against the reality of Nashville. Now the only thing she has going for her is her late grandfather’s chicken farm, which comes with molting hens that won’t lay,
one irascible rooster, and a huge mortgage held by a ruthless opponent—her
Great Aunt Nedda.

With fewer eggs to sell, MG needs extra money, fast. Even if it means carving out time for a job as a prep cook at The Rose—and resisting her attraction to its sexy head chef.

Joe LeBlanc has problems of his own. He’s got a kitchen full of temperamental cooks—one of whom is a sneak thief—a demanding cooking competition to prepare for, and an attraction to MG that could easily boil over into something tasty. If he could figure out the cause of the shy beauty’s lack of self-confidence.

In Joe’s arms, MG’s heart begins to find its voice. But between kitchen thieves, performance anxiety, saucy saboteurs, greedy relatives, and one very pissed-off rooster, the chances of them ever making sweet music are looking slimmer by the day.

The rooster gave a cackle of triumph and she dove for the gate, fiddling frantically with the latch. Already she could feel the air from his wings. Any second, it would be accompanied by pecks around the ankles and, if she was really unlucky, a few scratches from those talons on his feet.

“Allow me.” The voice at her side was close to basso profoundo.

MG started so violently she almost dropped the basket, which would have been a victory for Robespierre even if he hadn’t caused it.

The man standing on the other side of the fence was massive. Or maybe he only seemed massive because he was blocking her path to freedom. His bald head shone with perspiration, along with his face and his biceps. Now that she looked at him, she could see the damp sweat marks on his T-shirt stretching down his broad chest. Running shorts. New Balance shoes. Okay, that at least explained what the hell he was doing up and around this early in the morning, although how he came to be standing outside her chicken yard was still a bit of a mystery.

“Who are you?” she blurted.

He gave her a lazy grin. “Darlin’ you’re being attacked by a rooster. Does it really matter who’s getting you out of there?”

Something sharp hit the back of her leg. She glanced over her shoulder to see the enraged leghorn rooster dancing around behind her.

“Ready?” the man asked, his hand on the latch.

“No ma’am,” he rumbled, then pulled up the latch and opened the gate slightly. MG darted through, then turned to see him pull the gate closed behind her before Robespierre could adjust, flipping the latch across.

“Got yourself a mean one there.” He gave her another slow grin that suddenly made her toes curl.

She nodded. “He’s got attitude.”

“Joe LeBlanc.” He extended his hand in her direction.

The grin became slightly dry. “My name. Which you requested.”

Okay, sounds good, doesn't it? Well, having read this one, I can honestly say I could not put it down. I had forgotten how much I love visiting Konigsberg, but one chapter into this one, I was caught up in the life of this Texas town, with all of its many intriguing characters, some of them old friends, and some new ones as well.

The lead characters are a delight. What I like most about Ms Benjamin's characters is that they aren't these perfect, iconic beings, but real, down to earth folks, with flaws and quirks and insecurities, just like most of us. MG and Joe are no different, and I enjoyed getting to know them both, along with the supporting cast: even the chickens in this one have distinct personalities.

Of course, there are bumps in every road, and both MG and Joe have secrets in their pasts, and yet both are able to face adversity and push on. There are some very sweet moments, and some very hot moments as well. And the lengths MG's aunt Nedda will go to in order to try and get the farm away from MG and back where Nedda thinks it belongs - with her. Add to the tension, there is the thievery at the Rose, and who is behind all the problems in the kitchen there, and the cooking competition that gets sabotaged before it even starts, all adding up to some fast paced, can't put it down action.

When MG and Joe finally learn each others' secrets, I enjoyed watching them work together to find the solutions to what is happening, and come out on the happy ever after side. This is an excellent addition to the Konigsberg books, and I look forward to more.