The Coleman Family has ranched in the Rocky Mountain House Area of Alberta for generations. These modern day, contemporary romance stories follow the current family members as the find their place in the community, as well as their happily ever afters.

Today is my Salute!! to all things Canadian Cowboy. I never used to be a fan of 'Cowboy Romance'...then I got my hands on Vivian Arend's Six Pack Ranch books, and her deliciously sinful and delectable Coleman Clan. What Vivian does to warm up cold Canadian nights on the 'range' should be illegal in the provinces, and in most of the states south of the Canadian border. What is there left to say about these sexy, sometimes kinky, but always all man Coleman men? Well, apparently, a lot!!! Today marks the release of the fourth Six Pack Ranch book, Rocky Mountain Angel. If you've read any of these, you know each book focuses on one of the Coleman men, and this one is cousin Gabe's book. The title has more than one meaning, but I'm not going to spoil the fun of discovering what the duality is.

Now for the great part of this release day!!! One lucky commenter will win a copy of the first Six Pack Ranch book, Rocky Mountain Heat, in PDF, and I'm hoping to have some other goodies to give away as well. Depends on how many folks come by to comment, so be sure to leave a comment with your e-mail address in it - after all, I can't send a winner anything if I can't find you! 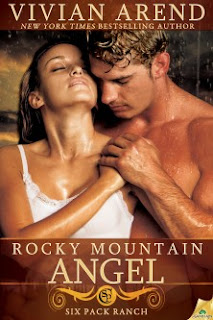 Sometimes even Angels must learn to fly…
Allison Parker needs a convincing excuse to come home to Rocky Mountain House. A hopelessly romantic reason that won’t let her mother suspect the truth—that Allison has discovered Mom is keeping a terrible secret from the family.


For the second time in less than twelve hours Allison woke in Gabe’s bed. It wasn't the scent of coffee teasing her senses as a wake-up call, but something savoury and rich. The sound of running water registered as well, and she sat up and stretched before looking around for the source.
Holy moly. She shouldn't have been so curious. Allison averted her gaze, but not before she’d gotten an eyeful.
The bathroom was off to her right. There was no door but instead an open archway revealed a long counter with a sink and a glass enclosure housing the shower. Which meant nothing but slightly foggy glass stood between her and a very naked Gabe. She was positive she’d spotted soap bubbles clinging to his body.
The urge to take a second peek and double-check the entire firm package rushed her, and she squirmed off the bed and fled into the living room.

Nothing comes easy. You’ve gotta work for it.
Matt Coleman always figured at this point in his life, he’d be settled down with a family. Since his ex split for the big city, though, no way will he give anyone else the chance to drop-kick his heart. Physical pleasure? Hell, yeah, he’ll take—and give—with gusto, but nothing more.

It’s the quiet ones that take you by surprise.
Beth Danube’s emotionally abusive husband is dead and buried. So is her heart. It’s no big deal, she has all she wants: her three little boys and a fresh start in a small Alberta town. What she doesn’t want is another man in her life—not now, maybe not ever.

He’s the one who taught her to ride. Now all he wants is to ride her.
Blake Coleman is old enough to know that acting on impulse causes nothing but a heap of trouble. But when trouble’s a western-hat-wearing blonde with slim legs that go on forever, what’s a man to do? Wanting the sweet girl next door is just wrong. The responsible thing to do is keep his hands off.


Rocky Mountain Angel is the fourth of Vivian Arend's Six Pack series, and it is the most emotional one so far. The rest of the family takes a back seat to Gabe this time, and his torment at trying to please his father comes through so plainly, it tugged at my heart. When Allison comes to Gabe with a proposition, one that includes a solution to his woes on the ranch, he has to decide if he is okay with the deception they both will have to perpetrate. Can Gabe pretend to be Allison's man, while she comes home, saying it is to be close to him, when in fact it is actually because she has discovered her mother is keeping a tragic secret from her children.

These characters are both wounded when we first see them, Gabe by his father's cold nature and disdain, and Allison by the situation with her mother. I liked that these two could find comfort in their friendship, and that, as time went on, the deception slowly became caring and finally, love. And the connection these two forge as they set the sheets on fire is scorching, too. I love that the Coleman men show up time and again here, and there are some real laugh-out-loud moments with them.  This story also brought some tearful moments, and lots of sighs and giggles too.

Ms. Arend has a real knack for making people feel like old friends, folks you want to visit with more every time you can. Every Six Pack Ranch book is a delight, but Rocky Mountain Angel has more emotion and passion to it, and I could not put it down. She builds her world, and never makes it feel anything less than real, like you could hop in a car and drive right out to Rocky Mountain House, sit in the diner and chat with Allison over coffee and pie.

If you haven't read any of the Rocky Mountain books yet, you are in for a treat. I recommend that you read all four, but be careful not to overdose on hot and sexy men to quickly, or you will never want to come back home.

Now, one lucky commenter will win a digital copy of the first book in the series, Rocky Mountain Heat. Just make sure you leave your email address in your comment. And thank you, Vivian Arend, for the many hours of enjoyment received from your fantastic books. I look forward to many more in the future.