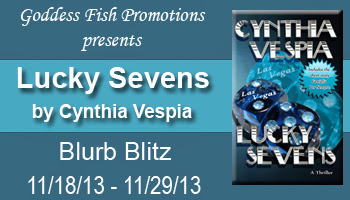 Happy Black Friday to the Americans visiting the blog today! Today's post is a Virtual Blurb Blitz Tour for Lucky Sevens by Cynthia Vespia, a Contemporary Suspense/Thriller book available now. As a Blurb Blitz, there is no interview or guest post, but there is a blurb, excerpt and a bit about the author. I will also post the list of participating blogs. Cynthia will be awarding an eBook copy of one of her backlist books to a randomly drawn commenter during the tour, and a Grand Prize of a T-Shirt (US ONLY) to a randomly drawn commenter during the tour. Please leave your e-mail address when you comment. 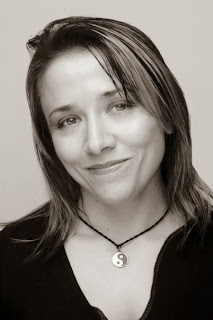 Cynthia Vespia, "The Original Cyn," has a background as a certified personal trainer; licensed private security guard; award winning video editor, and graphic designer. But the creative outlet of novel writing has always remained her first love.
Today Cynthia continues to write character driven suspense and fantasy novels. With a plot pace to stir the adrenaline and keep the pages turning, Cyn likes to refer to her novels as "Real life situations that you could find yourself in but hope to God you never do." In her spare time she enjoys reading, movies that involve a strong plot/characters, and keeping active through various forms of martial arts and fitness.
Find out more at: 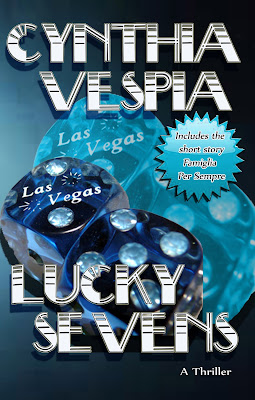 Luca “Lucky” Lucazi is a man who lives for the job, until the job starts to threaten his life. A former Navy Seal, Lucky is ideal as the head of security for Lucky Sevens Casino. But when major names at the casino start falling victim to deadly and suspicious "accidents" Lucky must fight his way through a cast of eccentric characters only Las Vegas could spawn, and his own battle with alcoholism, before his lover Brooklyn - the sweet-hearted stripper - becomes the next victim. But when Lucky faces off with illusionist Christopher King, endowed with real magic powers, will his luck finally run out?

Predict, prevent and protect. The same words he’d learned as a Navy SEAL bled over into his job as head of security very well. But as Luca “Lucky” Luchazi stared down at the body of his friend and former mentor Charles Vega he didn’t feel as though he’d honored those words at all.

More than a dozen police vehicles converged on the scene. The black and whites of Las Vegas Metro were scattered everywhere. Their flashing light bars washed everything in red drowning out the mix of neon colors that came from the casinos neighboring Lucky Sevens.

Charles had come to Vegas in its infancy and built his empire from scratch. Even while the others came crashing down to make way for the new mega resorts with their elaborate designs and theme park style attractions, Lucky Sevens remained standing as one of the last legendary casinos on The Strip.

Lucky had always admired the old man for remaining true to his ideals even when the casino was taking a pounding in the pocket book. Now he was nothing more than a sack of meat splattered all over the sidewalk.

Personnel from the county coroner's office had also responded to the scene, but not soon enough. The vision of good old Charlie lying with his robe open exposing his wobbly bits to the world, and lying in a pool of his own blood, would haunt Lucky for the rest of his days. Even now as they draped him in plastic and wrapped him up tight for his last ride all Lucky could see was the blood. He’d witnessed his fair share of death during war but this time it was different. This was Charlie. He’d been like a second father to Lucky ever since he set foot in sin city. So when he overheard two Metro officers disrespecting Charles’ death with their blown out theories Lucky set them straight.

“Hey ease up,” Lucky said walking in between the two officers. “I never thought you were the type to spread gossip, Mel.”

Lucky had known Mel Harrison for many years. They'd done favors for each other multiple times. Harrison was the only guy on Metro that Lucky held any respect for. He'd always assumed the feeling had been mutual.

“Sorry Lucky, I know how much Charlie meant to you.” Harrison motioned to his partner. “Get the coroner over here to finish up.”

Harrison put a reassuring hand on Lucky's shoulder and the two officers went on about their business. Lucky let them walk. He let them scrape Charles Vega off the sidewalk like road kill. He just stood there as a blast of hot wind rolled in off the desert and struck him like a blow dryer on high speed.

Damn weather had turned on a dime. What were they calling it? El Nino? Something Spanish – go figure. Name somewhat brought to mind hot sand beaches and girls in Brazilian cut thongs.

There would be questions about Charlie's death, inquiries, maybe accusations but then they’d put everything to bed wrapped in a nice little bow. To the police, the papers, and the tourists (who even now posed for pictures in front of a real life Las Vegas crime scene) it would all be dusted off as just another gambling related suicide.

For Lucky the question would gnaw at his insides for eternity.

How could he have let this happen?