A Visit to Long Guyland 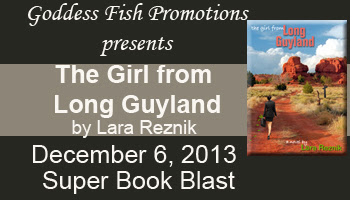 Today's post is a Super Book Blast for The Girl from Long Guyland by Lara Reznik, a Thriller Suspense Book available now from Violet Crown Publishers. As a Book Blast, there is no interview or guesst post, but I will post a blurb, excerpt and a bit about the author. Lara will be awarding a $50 Amazon GC to a randomly drawn commenter during the tour, so leave your e-mail address when you comment. I will also post a list of participating blogs, visit them for more chances to win.

***The Girl From Long Guyland will be on special sale at Amazon on Saturday December 7 for a fantastic $.99. Grab it while it's on sale*** 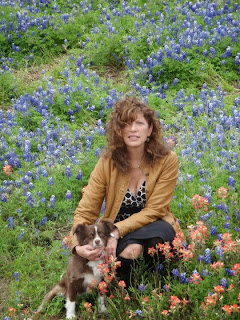 Lara Reznik grew up on Long Island but escaped to New Mexico in 1970 in a Karmann Ghia that she and her boyfriend jump-started cross-country. As an English major at the University of New Mexico, Lara studied under esteemed authors Rudolfo Anaya and the late Tony Hillerman. She also attended a summer program at the prestigious Iowa Writers Workshop.
Ambidextrous from birth, Lara preferred her right-brained creative side, but discovered she could make a better living with her left-brain skills, so entered the I.T. field in 1985.
Lara published her first novel, The Girl From Long Guyland in November 2012. The novel ranked #1 during its recent Amazon Kindle promotion and has over 115,000 Kindle downloads. In addition to her novels, Lara has written and optioned three screenplays that have garnered semifinalist and finalist wins in the Austin Heart of Film, Southwest Writers, TV Writer, Chesterfield and Writer's Digest contests. Currently, Lara is working on a new novel based on her screenplay, The M&M Boys. 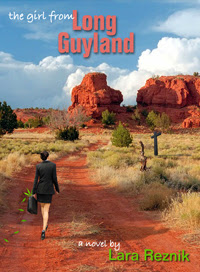 Blurb for The Girl From Long Guyland

Laila Levin enjoys a successful marriage and a thriving career as an I.T. executive in Austin, Texas, but she can't quite shake her lifelong sense of not truly belonging anywhere.

When her company announces a major layoff, Laila finds herself caught between an unscrupulous CEO and her promiscuous boss. Then news of her college roommate's suicide stirs up a dark secret involving three devious friends from her past. One has betrayed a vow, another wants to rekindle their romance, and the third is out for revenge.

Suddenly for Laila, it's 1969 again. She's only seventeen, and she's left her sheltered home in Long Island for college in Connecticut. Amid protests of the Vietnam War, she's tempted by the sex, drugs, and rock 'n' roll that rule her generation. Laila gets swept up in a deceptive love triangle with two older locals and initiated into their unethical hippie family. Too late she realizes her search to belong has led to tragedy.

Laila must now juggle the demands of her perplexed husband and her baby boomer past forcing her to make choices that endanger her survival and challenge her conscience.

She learns that the lines between right and wrong are often blurred, and sometimes you have to risk everything to be true to yourself.

Excerpt from The Girl From Long Guyland

A couple dozen stars and the eye of a yellow moon pierce light through a sky filled with smoke. I look out the broken window to the ground below. Crumpled in the weeds is a lifeless body with red-flecked eyes, a bushy mustache, and sweet smile.
Vapor seeps into the room. I can barely breathe. Ben wraps his arms around me as I weep. Denise lies in a catatonic state perched on the bed. Why is she only wearing her bra and panties?
Chris stumbles inside the room. His eyes glow like diamonds. He cranes his head out the window. “We gotta do something, man.”
“I’ll call for an ambulance,” I say.
Ben gulps, “That’s not a good idea.”
“We have to,” I insist. “For Godsakes.”

WITH A JOLT, I awake whimpering. The nightmare has infested my dreams for years. It may be time to see a shrink.

The anxiety subsides when my husband Eduardo arrives with a cappuccino and the morning paper. “Are you okay? It sounded like you were crying.”
I clear my throat. “No, no, I’m fine. Just a dream, I guess.” I’ve never discussed these recurring nightmares with him. Eduardo’s got his own problems. He was recently laid off in a corporate downsize and refuses to talk about it. There’s lots of tension in our home right now. Maybe we should both see a shrink.

Sounds good to me...I sense a shopping trip in my future.