Today is my stop  on the Book Blast Tour for Helen Harper's Urban Fantasy series, Blood Destiny. Although there is no interview or blog post, I will post blurbs from all three books, Bloodfire, Bloodmagic and Bloodrage, as well as an excerpt from Bloodfire. And of course, also a bit about the author, Helen Harper, as well. And at the end, I will post the entire schedule of tour stops, to give everyone more chances to win Helen's randomly drawn prize of a $25 Amazon GC to one lucky commenter.

Now for a quick intro to our guest for the day, Helen Harper

Helen Harper is an English teacher currently living abroad in Malaysia. As a long time reader of urban fantasy, she finally bit the bullet and began to develop her own series of novels.

Helen has always been a book lover, devouring science fiction and fantasy tales when she was a child growing up in Scotland. "I always loved the escapism provided by those genres," states Helen. "No matter how bad life gets, you can always find a route out, even if only temporarily, in the pages of a good book."

The growth of urban fantasy fascinated her - the mix of reality and fantasy along with strong heroic female characters appealed from the very beginning, and inspired her to write her own.

Blurbs for The Blood Destiny Series 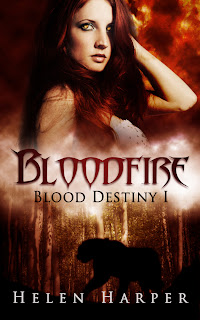 Mackenzie Smith has always known that she was different. Growing up as the only human in a pack of rural shapeshifters will do that to you, but then couple it with some mean fighting skills and a fiery temper and you end up with a woman that few will dare to cross. However, when the only father figure in her life is brutally murdered, and the dangerous Brethren with their predatory Lord Alpha come to investigate, Mack has to not only ensure the physical safety of her adopted family by hiding her apparent humanity, she also has to seek the blood-soaked vengeance that she craves. 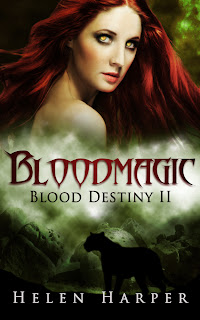 After escaping the claws of Corrigan, the Lord Alpha of the Brethren, Mack is trying to lead a quiet lonely life in Inverness in rural Scotland, away from anyone who might happen to be a shapeshifter. However, when she lands a job at an old bookstore owned by a mysterious elderly woman who not only has a familiar passion for herbal lore but also seems to know more than she should, Mack ends up caught in a maelstrom between the Ministry of Mages, the Fae and the Brethren.

Now she has to decide between staying hidden and facing the music, as well as confronting her real feelings for the green eyed power of Corrigan himself. 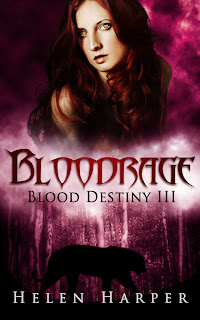 Mack begins her training at the mages' academy in the hope that, by complying, the stasis spell will be lifted from her old friend, Mrs. Alcoon. However, once there, she finds herself surrounded by unfriendly adults and petulant teenagers, the majority of whom seem determined to see her fail.

Feeling attacked on all fronts, Mack finds it harder and harder to keep a rein on her temper. Forced to attend anger management classes and deal with the predatory attentions of Corrigan, the Lord Alpha of the shapeshifter world, her emotions start to unravel. But when she comes across a familiar text within the walls of the mages' library, which might just provide the clues she needs to unlock the secrets of her background and her dragon blood, she realises that her problems are only just beginning...

My hand finally found what I was looking for when it curved round a cold metal canister.  It never to hurt to come fully prepared.  I pulled out the hydrogen peroxide, twisting it so the nozzle faced the stone, and sprayed a tiny portion onto the black surface.  As soon as the chemical hit the shiny surface it began to foam.  It was definitely blood.  The curling heat inside me rose higher and my insides felt as if they were starting to burn.  The feeling of panic matched the bloodfire but I did my best to push them both back down.  Neither would help me right now.  I put the stone carefully into a side pouch where it wouldn’t get lost.

The moon continued to shine steadily down, casting shadows amongst the heavy trees.  I could hear the distant hooting of a night owl out searching for prey and the skitter of a small animal somewhere nearby.  I ignored them all and concentrated on the signs I could see at my feet.  There was something else there.  Reaching into my pack again, I found my torch, and clicked it on to look closer.

He had been this way.  John was light on his feet and left little trace of his presence but I knew him well and knew this area.  He’d disturbed the bush to my right, brushing past it as he ran.  And judging by the distance between his steps, he’d been running fast, as if something had been after him.  I frowned and arced the torch over the area, first close by then further along the path.  There was something up ahead.  Stepping forward, I tried separately to sense what it might be, but I was no shifter and came up short.

Thanks again to Helen Harper for bringing these to my attention; they sound fantastic. Be sure to leave your e-mail address when you comment, and visit the other sites as well to increase your chances for the prize.