Fantasy, Magic and 'The Cracked Slipper' 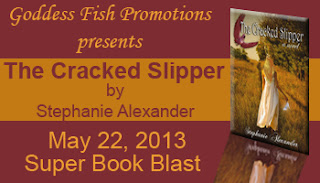 Today's post is the Super Book Blast for The Cracked Slipper,  a Romantic Women's Fiction Fantasy by Stephanie Alexander available now. As a Book Blast, it will not include interviews or blog post, but will have the author's bio, the blurb and an excerpt, and I will also post links to the rest of the blogs on the blast. This is a bit of a twist on a fairy tale, with some less than normal twists to the story, and I look forward to picking up a copy soon. Stephanie will be awarding a $10 Amazon gift card to a randomly drawn commenter during the tour, so please leave your e-mail address when you comment. 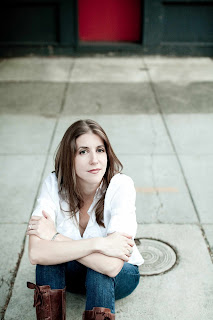 Stephanie Alexander grew up in the suburbs of Washington, DC, the oldest of three children. Drawing, writing stories, and harassing her parents for a pony consumed much of her childhood. After graduating from high school in 1995 she earned a Bachelor of Arts in Communications from the College of Charleston, South Carolina. She returned to Washington, DC, where she followed a long-time fascination with sociopolitical structures and women’s issues to a Master of Arts in Sociology from the American University. She spent several years as a Policy Associate at the International Center for Research on Women, a think-tank focused on women’s health and economic advancement.

Stephanie embraced full-time motherhood after the birth of the first of her three children in 2003. After six wonderful years buried in diapers and picture books she returned to her childhood passion and wrote her own fairytale. Her family put down permanent southern roots in Charleston in 2011. Stephanie is an adjunct professor of Sociology at the College of Charleston. 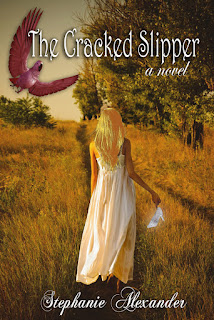 Blurb from The Cracked Slipper

When Eleanor Brice unexpectedly wins the heart of Gregory Desmarais, Crown Prince of Cartheigh, she's sure she's found her happily-ever-after. Unfortunately, Prince Charming has a loose grip on his temper, a looser grip on his marriage vows, and a tight grip on the bottle.

Eight years of mistreatment, isolation and clandestine book learning hardly prepare Eleanor for life at Eclatant Palace, where women are seen, not heard. According to Eleanor's eavesdropping parrot, no one at court appreciates her unladylike tendency to voice her opinion. To make matter worse, her royal fiancé spends his last night of bachelorhood on a drunken whoring spree. Before the ink dries on her marriage proclamation Eleanor realizes that she loves her husband's best friend, former soldier Dorian Finley.

Eleanor can't resist Dorian's honesty, or his unusual admiration for her intelligence, and soon both are caught in a dangerous obsession. She drowns her confusion in charitable endeavors, but the people's love can't protect her from her feelings. When a magical crime endangers the bond between unicorns, dragons, and the royal family, a falsely accused Eleanor must clear her own name to save her life. The road toward vindication will force a choice between hard-won security and an impossible love.

The Cracked Slipper is a book club friendly fairytale retelling in the vein of Gregory Maguire, with a dash of romance. Set in a pseudo-renaissance, corset-and-petticoats enchanted kingdom, The Cracked Slipper brings a magical twist to women's fiction.

Excerpt from The Cracked Slipper

"Their host, Sir Robert Smithwick, rose and gave a toast to the health of his nephew. Other speeches followed, each more suggestive than the next. She laughed out loud when Dorian subtly mocked Brian’s inability to hold his liquor. Gregory spoke last, and gave a surprisingly thoughtful salute to his cousin. She patted his arm when he sat, and he gave her a tentative smile.

As everyone returned to their venison and cliff shrimp Eleanor's stepmother tapped her goblet. Mother Imogene rose and lifted the cup. “I must ask you to pause for just one more moment,” she said. “I have another announcement.”

“My darling,” she said to Sylvia. “We’ve all so enjoyed your hospitality this summer. But now my daughter must remember herself, and rest, for with the winter will arrive a future duke! Our dear Sylvia is expecting!”

The guests applauded, congratulating Imogene and Sylvia. Sylvia gazed demurely in her lap, as if embarrassed by the association with procreation. As for the expectant father, he was nowhere to be seen. His wife’s entertaining had proved too much for him, and the duke returned to Harveston for some peace.

Eleanor glanced down the table. Anne Iris retched into her cup, but it was Dorian’s calm face that inspired her. She stood and the room quieted. “My dear sister,” she said. “Let me extend my good wishes.”

“I will say, Sylvia always had a flair for the dramatic when we were children. Who knew you would entertain so many with your widely varied talents? While I have recently been ill, I’ve heard you neglect no one, from the loftiest lord to the most common stable hand. We are so fortunate there is one among us who gives so generously of herself to others. It’s no wonder His Grace, your husband, took his leave. It must be difficult to share you with so many.”

Imogene’s eyes bulged and her nostrils flared, while Sylvia gave an uncertain twitter. Eleanor looked at Dorian again. He winked.

“So I salute you, Your Grace,” she said.“May your child look just like you. Just as lovely.”

The guests applauded, all the while hiding their smirks and chuckles in their goblets and napkins. Eleanor sat down. This time Gregory touched her arm. “Well played,” he said."

Oh, my, what an...elegant way to put someone in their place. I love Eleanor already, and I really do need to get this one for my collection.