What's 'A Witch Without Magic' To Do 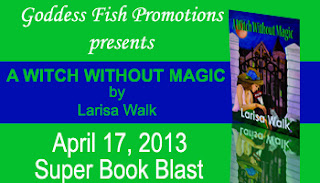 Today's post is the Super Book Blast for Larisa Walk's A Witch Without Magic, her Paranormal Fantasy that is available now. This is a Book Blast, so there is no interview or blog post, but I will post a blurb and excerpt of A Witch Without Magic, along with Larisa's bio and links. I will also post the Tour Links, so you can have more chances to win one of the five $10 Amazon Gift Cards she will be awarding to commenters. Just be sure to leave your e-mail address when you comment. 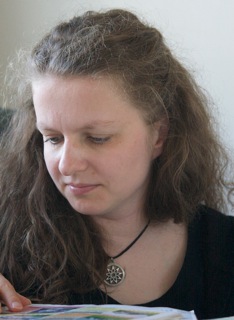 Larisa Walk, a native Russian, lives in California with her husband and two formerly homeless cats. She writes paranormal fiction that is more often than not populated by characters from the Russian fairy world. Her short fiction appeared in several anthologies and magazines. She has published a historic fantasy novel, A Handful of Earth, and a modern paranormal novel, A Witch Without Magic. See her quirky blog posts here: http://www.larisawalk.com

Blurb for A Witch Without Magic 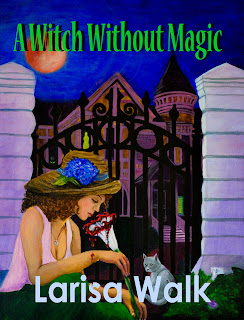 When her neighbors accuse Belladonna of Satanism and making them age years to days, she must find who is behind it or face a modern day witch hunt. Her mysterious enemy knows where to strike to cause the most damage: Belladonna's only friend is losing his life-force; the garden that feeds her is dying; and her house ghost goes poltergeist. To save her neighbors and friends and prove her innocence, she must travel to the Otherworld where butterflies have razor wings and where her worst fears will come to life.

Excerpt From A Witch Without Magic

The mob on the other side of the wrought iron fence wore no tri-cornered hats or starched bonnets.  They didn’t brandish pitchforks or flaming torches.  Hell, they didn’t even bring a preacher to drive the Devil out.  Still, they had come to flush out a witch and the witch was me.

They were thirty all together, gathered outside my gate under the two California live oaks that shade the sidewalk in midday.  I had to squint into the still hot mid-October sun to study their unfamiliar faces.  The mob included several dwarves.  The youngest dwarf must have been in her forties, a tiny woman that for some reason wore a yellow, red and blue Snow White dress with an appliquéd picture of Snow White on the chest.  She didn’t look like a typical dwarf: no classically high forehead and her arms and legs were proportionate.  She was holding a fluffy purple teddy bear by a front paw and sucking her thumb.

In the sun my forehead sweated under the straw hat.  A mocking bird’s harsh chirrup burst from the oak on the right, piercing as a car horn.  I flinched.

I don’t much like or trust people in large groups - doing time in Greenville State Prison for Women had taught me that.  In prison the exercise yard is the most dangerous place to be: too many inmates in one area, too many chances to be stabbed with a shiv made from a sharpened toothbrush handle or from melted and hardened Styrofoam cups.

Thanks again to Larisa Walk for bringing this book to us today, I like the sound of it. Looks like it's time for a shopping trip to my favorite e-book store.