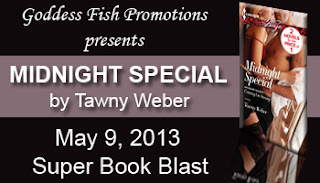 Today's featured Book Blast is for Midnight Special, a Hot Contemporary Romance from Harlequin Blaze by Tawny Weber. As with any Book Blast, there is a blurb and excerpt, a bit about the author and a line-up of the tour stops for this one. Tawny will be awarding a bookmark goodie package to one commenter at each stop (bookmark, signed cover flat, post it pad, magnet) and a grand prize of a $25 Amazon / BN (or other bookstore of the winner's choice) GC to one randomly drawn commenter during this tour and her other Book Blast on May 14th. Visit both days for more chances to win, and be sure to leave your e-mail address so I can send it on as my winner for the tour. 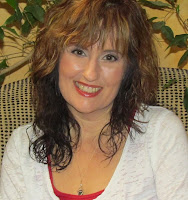 Tawny Weber has been writing sassy, sexy romances since her first Harlequin Blaze hit the shelves in 2007.  A fan of Johnny Depp, cupcakes and color coordination, she spends a lot of her time shopping for cute shoes, scrapbooking and hanging out on Facebook.

Readers can check out Tawny’s books at her website or join her Red Hot Readers Club for goodies like free reads, complete first chapter excerpts, recipes, insider story info and much more.  And for a limited time, she has a few open spots on her Street Team! 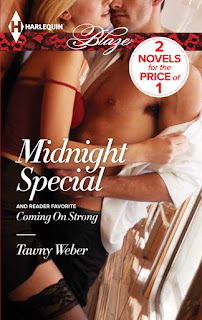 Somewhere on the train is a key witness for a crime involving arson, murder and a high-profile businessman. And reporter Marni Clare will do whatever it takes to get the story—even if it means crashing in a sleeper car that’s she’s not sure she’s reserved. But when she wakes, she finds herself curled up with the man she’s seeking…and he’s hot enough to derail all her plans!
FBI special agent Hunter won’t complain about the wickedly hot blonde in his arms. And maybe it’s the medication he’s on, but he’s even agreed to share his room for the entire journey….
It’s a long trip in close quarters, and within days their berth becomes the scene of some steamy railway romps. But is Marni just having fun…or is she taking Hunter for a ride?

After a couple of seconds of his death stare, Marni’s smile drooped, then she bit her lip and looked away.

There. He still had it.

The ability to intimidate sweet women. He’d bet he could make babies cry and puppies whimper, too.

“Really grumpy,” she decided, closing the lid of her laptop, setting it aside and getting to her feet. She glanced at the clock on the wall, then at her watch as if to verify the time. “I’ll bet you’re hungry. We haven’t had anything but coffee in two hours. Want to get breakfast?”

“Look, I can’t do this roommate thing. It was nice enough of you to offer to share, but it’s just not going to work.”

Her cupid’s bow mouth dropped open and she stared for so long, he wanted to blow on her face to make her blink.

“It’s my berth. I was in it first. Out of the goodness of my heart, I offered to share it with you. So why would I give it up?”

Hunter considered flashing his FBI badge and going the national security route. But he was seriously tired. Tired and sore and empty. He needed a little downtime. He had a week to build a case that would put away the head of one of the biggest criminal organizations on the east coast. He wasn’t going to do that with people bugging him, asking FBI questions and passing him in the hallway muttering “the truth is out there.”


Another intriguing book to buy...will I ever learn? Oh well, it could be worse, at least books are...educational and entertaining, right? Below is the first leg of Tawny Weber's tour.