I Need You For Christmas

I Need You For Christmas
Leah Braemel
Carina Press

Today I am giving y'all a look at Leah Braemel's hot holiday story, I Need You For Christmas. First I'll be giving y'all a peek at an excerpt, then I'll tell you what I think of this one. This is also available in a three story holiday book from Carina Press, with stories by Anne Calhoun and K. A. Mitchell, along with Leah's story, and all three are available separately as well. Leah is giving away a Kindle Fire for the tour overall. You  will need to enter at her website:  www.leahbraemel.com and fill out the Rafflecopter.  She is also giving away a backlist copy of one of her books for each blog.  The contest can run throughout the tour, so be sure to leave your e-mail address along with a comment. 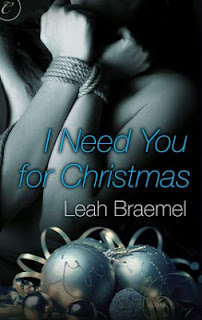 Ryan Porter is a sculptor, and beneath his callused hands, even the most rigid metals bend to his will. So, too, does his girlfriend Megan--a confident, strong woman who delights in submitting to Ryan's dominance in the bedroom.
Megan is a Mountie, and she's spent the past few years in the Arctic following her career dreams. Family obligations kept Ryan at home, but their love survived the distance thanks to several hot visits. A Mountie always gets her man, and Megan is bound and determined to keep Ryan.
Now Megan's with Ryan for the holidays...but how long will this visit last? She's always been willing to do anything Ryan desires, but will he finally tell her that all he needs for Christmas is her?

He lowered her head and kissed the soft skin beneath her ear. “I love you.”
I always have. I always will.
Her breath hitched when his hand dipped beneath the water and over her belly. Her legs fell open, pressing against his, as his fingers continued their journey over her mound and between her folds. He toyed with her clit, teasing it until her pulse sped up. When he speared her sheath with two fingers, her hips arched into his hand, causing water to slosh up dangerously close to the top.
“Oh God, yeah.” She writhed against him, rubbing her ass against his erect cock in an erotic torture.
On occasion he wished he was a photographer, that he could capture the dreamy expression on her face as she started to come, could forever immortalize the creamy hue of her breasts with their cinnamon nipples now taut and hard. Oh he could sculpt her expression and her face, but it would be hard marble, which couldn't capture the warmth, or clay, which couldn't match the softness. But no camera, drawing or sculpture could convey how her body clenched and rippled around his fingers in sync with the soft puffs of breath with each stroke. Nor could they capture the heady scent of her arousal, or the spicy taste of the cream coating his fingers.
Her moans vibrated through him, echoing off the marble walls, until his balls drew up close to his body. He’d had to satisfy himself with hand-jobs since he’d seen her last, and as much as he wanted to bury his cock deep in her body, this time was all about her needs, not his.

Whew!! That is a hot one, for sure. I have to tell you, I do love Leah's style. Her characters are well developed and real, with insecurities and fears just like the rest of us. And this story brings home the old but true belief that nothing can mess up a good relationship faster than lack of communication. When Ryan and Megan try to second guess each other, they both lose sight of what is important - their love for each other.
Megan's dream has always been to become a member of the RCMP, and now she wants nothing more than to be with Ryan. But being with him means changing her dream a bit, and joining the Ontario Provincial Police, and staying with Ryan. But she wants to surprise him with the news, and keeps her secret well hidden.
Ryan has decided he's tired of being apart from Megan, and makes plans of his own, plans to give up his teaching and move up to her home base. but he hasn't told her his plans, either.
I love this story, a hot and passionate updating of the O Henry story, Gift of the Magi. Each is willing to give up their most precious thing to be with the one person who means the world to them. But by not communicating, they almost lose sight of their love, and what makes them work so well as a couple. I loved watching these two try so hard to keep their secrets, and each feeling that  the other was pulling away.
The supporting cast was also terrific, with so much love between the family members, you could just feel how they all were so close. And Leah Braemel can do hot like nobody else does it. Do these two finally reveal their secrets and find that happily ever after we all want? You need to read I Need You For Christmas to find out.