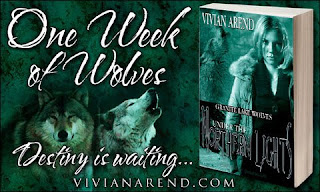 UNDER THE NORTHERN LIGHTS

Robyn’s deafness doesn’t stop her from taking the backcountry trip she’s been craving. Meeting a hot, ripped hunk-of-male at the Yukon cabin starts cravings of a different kind. And raises questions about wolves, mates, and duels to the death.

He wanted a quiet retreat before challenging for the pack Alpha position. Keil wasn’t planning on meeting his mate or discovering she’s not aware she has the genes of a wolf to go along with her attitude…

Tad’s workaholism keeps his bush-pilot company in the air, and his inner werewolf in check. Letting it lose would mean compromising his human principles. Then Missy re-enters his life, and their chemistry is off the charts, pushing him closer to the step he’s not sure it’s safe to take.

A wolf pack is a dangerous place to have secrets, and Missy’s corrupt Alpha has sniffed out her carefully hidden Omega powers. Her only choice is to get to Tad, and hope like hell his untapped powers are strong enough to negate her own…


This is a "must have" book, filled with humor, romance, suspense, and scorching hot shifters having enough smoking hot sex to melt the polar icecap.