Take a Trip 'Through the Oracle's Mist' 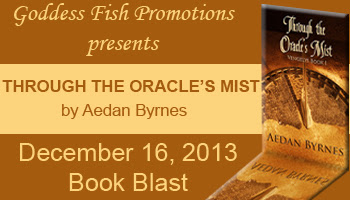 Today's post is a Book Blast for Through the Oracle's Mist by Aedan Byrnes, a Fantasy Paranormal Romance available December 31, 2013 from Drake Valley Press. As a Book Blast, there are no interviews or guest posts, but I will post a blurb and excerpt, as well as a list of participating blogs for this tour. Aedan will be awarding two journals (with the winners' choice of covers) to randomly drawn commenters and an Erian Crest necklace as a grand prize to one randomly drawn commenter during the tour. 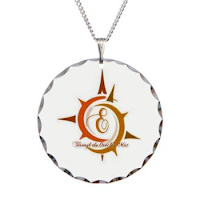 There is no simple description for Aedan Byrnes. Obsessive, dreamer, reclusive, compulsive, outdoorsman and wordsmith would be among the list if one were started. The displaced Gael lives in the upper Midwest with family between jaunts wherever the road takes him. A frequent traveler, he is as likely to be found rock climbing or spelunking as sitting fireside dreaming or aimlessly floating away.

A lifelong lover of words and writing, he claims a diverse reading appetite and his writing reflects the myriad influences. A self-proclaimed 'reader's writer', he looks for the emotional and the sensory in word combinations, not just the visceral comprehension of phrases in the stories he crafts and his love of all things literary shines through.
https://www.facebook.com/#!/AedanByrnes 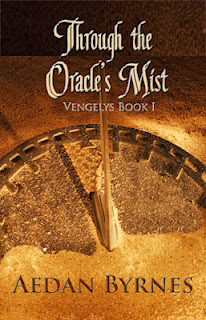 Blurb for Through the Oracle's Mist

In the blackest night, with the moon and stars to guide him, she would always be there waiting…

Cyrenna thought she died the day she watched Tynan and his brothers jump through the banishment portal in an act of solidarity with Rigor. Little did she know, it would be the first of many deaths she would experience in her quest to claim his heart. She would surrender not only her immortal soul, but a mortal one repeatedly. Through a deal with the great Oracle, she has multiple mortal lifetimes to change the direction of her future and have a chance with Tynan.

Her journey spans the ages from the GenPei War in Japan and the Silk Road west, to Cromwell, the Three Kingdoms and modern times, bringing her one step closer to forever until she makes a misstep. Then, the burden falls to Tynan. The only thing that is absolute is her fervent hope that he will come, but there’s one big problem.

Through it all, he doesn’t so much as know her name.

Excerpt from Through the Oracle's Mist

How many times can a man be broken? How many times can a man die and never have it be final? How many lost loves or lost chances at love will it take to undo any chance of ever becoming whole? In the purest sense…only one. Nothing I could imagine or ever endure would compete for the absolute punishing agony of her folding me into her arms to comfort me and hearing her whisper…

Two words. Who knew that two words would be all that it would take to loose the storm? Hardly two words really, only five letters. Five little letters with extreme power. Five little letters to rob Zeus of his most lethal bolt, focus the strike, and rend me in pieces. The surge had pushed past my pride and leaves me sobbing for the loss I had yet to experience. A loss I knew would take my breath, but I cannot die. How cruelly ironic that death has become my sole wish now?

My internal emotional upheaval is a flash storm out of place beneath the cloudless sky. The cacophony of my noisy tears and transition scatter the small creatures for miles. I have no control and shift without grace. Rage and pain coalesce to an explosion, angst roaring as the internal battle is waged and the war lost before the call to arms is done sounding. My thunderous eruption screaming against the fading light, with a rising silvery moon and shimmering stars to bear witness to my destruction. The metamorphosis from man to beast is abrupt. I shift, not with the flexing of bone and the stretching of skin, but with the crack of a gun blast and a single pull to form. It is razor wire across my senses and I am bloodied raw without a trace to be found.

A testament to her, she stands still. Not frozen, but placated to let me render the fury that must come out as I cannot hold it in. The beast from within is enormous, but not big enough to hold so much. I warned her. I told her. I had made her aware almost cruelly that first time I let my inner wild out that this day might come…could come…would come and that it would be ushered in on an unseen tide that would sweep our perfect world away. I had wanted her to be afraid. She wasn’t. She had believed, but had also naively assured me that the day would be long into the future and we would enjoy the time until then.

She had been wrong. There was nothing to say now. ‘I’m sorry’ would be a hollow sentiment and ‘I was wrong’ would do nothing as the last thing I would want to hear and know about this was that I had been right.