Time to 'Burn With Me' and with R.G. Alexander Tomorrow will see the release of the first book in R.G. Alexander's newest series, and this book is smokin' hot, my friends. I was lucky enough to get a copy of Burn With Me to read and review, and I wanted to see what all of R.G.'s hollering was about. After reading this one (three times, no less) I can see why she is so excited. I could not put this one down, and did not want this one to end. I'm already anxiously awaiting the next one, wondering where Ms. Alexander will lead me in the future of Aziza Jane Stewart's world.

The characters here are fascinating...and there are such a range, from normal humans like Greg and Aunt Penn, to Jinn like Ram and Shev, Aziza's giant Stalker Brandon and so many others, each with an agenda concerning Aziza and her future. I enjoyed the interplay between the characters; the teasing word play between Greg and Aunt Penn, the sarcasm of the Jinn, and the confusion that Brandon shows to Aziza add up to a very intriguing story. I can see people choosing sides here...will you be Team Ram, Team Brandon, or, like me, Team Greg?

I enjoyed watching as Aziza discovers who, and what, she really is, and learns that there is no 'curse', but rather some differing factions each seeking to influence her awakening as the Fireborne, the last in the line of an ancient bloodline. At first, she is confused, then determined, and finally she just gets angry at the truly horrific things that have been done to ensure she become what she was destined to be, at all that was sacrificed, unknown to her, to reach this point in her life.

R.G. Alexander uses humor, danger and screaming hot passion to keep Aziza on her toes, and I loved the interaction between Aziza and Brandon, Aziza and Ram and then there is that one really hot scene inthe barn with Brandon and an invisible Ram that...well I'll let you use your imagination on that for now.

I recommend this one to anyone who likes hot sex, unusual characters, and lots of action in unusual places. Would I buy this book? In a heartbeat...as a matter of fact I've pre-ordered three copies for friends of mine who I know will devour it like I did. 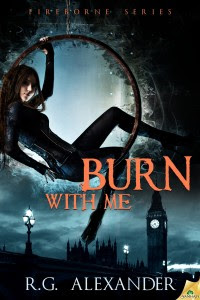 Aziza Jane Stewart is living on borrowed time, and making a few mistakes in London seems like a good way to go out with a bang. But when two compelling strangers draw her into an ancient conflict, she realizes her curse isn’t about death at all…it’s about the power within her.

The sexy giant following her says he can smell trouble on her skin, the smokeless fire and magic of the demons he was born and bred to hunt. Brandon may be an enforcer, but his reaction to her is anything but adversarial. Ram, her new Jinn shadow, will do whatever it takes to come between them, and he’s just as hard for Aziza to resist.

When her dark family legacy burns to the surface, whom can Aziza trust? The alpha male who pushes all her hot buttons, the Jinn who seduces her in dreams, or the emerging Fireborne within? As danger circles closer, she must learn to embrace her newfound powers—and trust someone with her heart—before she becomes the final casualty.

Warning: Explicit content, magic, danger, voyeurism, chains, a secret ménage and carnal deeds of devilish debauchery at every other turn. Basically…fasten your seatbelts and get ready to burn.

A taste of Burn With Me:

“Clever. So very clever and fearless and smart, aren’t you?”

Ram dragged her body up against his, the yellow rose pressed between them. “There are other ways to switch you on, Aziza. They just aren’t as much fun.”

She was breathless. Her body—the traitor—reacted instinctively to his. “So you admit it.”

“Why not?” He shrugged, his head moving closer to hers, his emerald stare piercing. “I don’t want to die. Do you? Oh yes, I forgot. You do. That’s why you took those risks, isn’t it? Why you decided to live for the first time when you found out you were going to die?”
His grip tightened and he shook her roughly. “You know it won’t matter why this is happening or what you can do with your gifts. We are doomed anyway, because you’ve already given up. You want to be cursed because then you won’t have to accept what’s happened. Accept the loss and move on. Accept your life, or what’s left of it once you’ve checked off every item on your list.”

“You’re a bastard,” she whispered.

Ram licked his lips. “And you still want to fuck me.”

Where you can buy Burn With Me