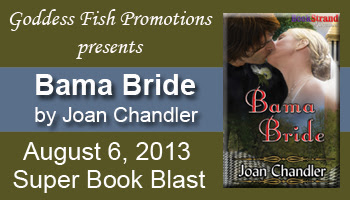 Today's post is a Super Book Blast for Bama Bride by Joan Chandler, a Contemporary Mainstream romance available now from Book Strand Publishing. As a Book Blast, there is no interview or blog post, but I will post a blurb, an excerpt and a bit about Joan Chandler. Joan will be awarding a $25 Amazon gift card to a randomly drawn commenter during the tour, so please leave your e-mail address when you comment. I will also post links to the participating blogs for you to visit, to increase your chances of winning.


Joan Chandler is a Florida native who has lived in the Deep South all of her life. She is married with two children who are her pride and joy. She lives a double life of sorts, holding down a nine-to-five job during the day, and writing steamy romance at night—often with her black cat curled up in her arms as she types.

When she’s not spending her spare time working on her next novel, she loves to go camping, sharing girls’ night out with her friends, walking her two dogs, and watching college football. 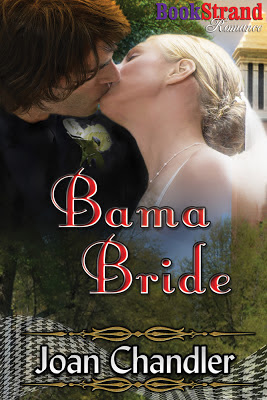 When they dance, inner passion heats up while inhibitions melt away. Neal quickly discovers David’s not a Southerner at all. He’s a Boston architect, in Tuscaloosa for only one night. The next morning, they struggle to walk away from something that caught them both by surprise.

Time doesn’t diminish the ache they feel in each other’s absence. Unable to stay apart, David arranges to take Neal to watch her beloved Crimson Tide play in a football bowl game. Reunited, they’re determined to make it work. When separated, they perfect the art of open communication. They each know that true love is a long shot.

But distance isn’t the only thing standing in their way. Unbeknownst to her, Neal’s overprotective father is, too. With so much conspiring against them, can a natural disaster turn the odds in their favor?

“Hey, cowboy. How about a dance?” As soon as the words were out of her mouth, she cringed. Wow, even to my own ears that sounded way too cheesy.

She looked him over as he stood with the sole of one boot propped against the wall, and a Stetson perched atop his head. He had sinfully good looks, and his olive complexion and wavy black hair gave him a swarthy, pirate-like appeal.

“Evening.” He nodded, but his gaze remained focused on the room, never lingering in one place too long. Clearly, she had been dismissed.

So much for my skill at playing the vamp. This is shaping up to be an epic fail.

With each swig he took from that long-necked beer bottle, however, she found herself wanting nothing more than to offer to lick off the moisture that clung to his mouth after every swallow. She decided not to give up so easily.

“You’re about empty. How about a second round? My treat?”

He locked eyes with her then, and humor glinted in his. The gorgeous stranger rewarded her with a dazzling smile even as he shook his head in polite refusal.

His fingers were long, and his hand was broad. He exuded sex appeal. But she wasn’t used to these games of pursuit. It was usually the other way around, and she was fending off the unwanted advances.

Jeez, I must look utterly pathetic to him just standing here with doe eyes. I don’t know what possessed me to think I could ever stand a chance with someone like him.

She started to back away when suddenly the band began to play the first strains of “Sweet Home Alabama.” She took it as a sign that this might be her lucky night after all. She quickly downed the rest of her sour apple martini to bolster her courage and then deposited the empty glass on a nearby table.

“Are you just passing through?” She spoke loudly to be heard above the cacophony of their surroundings.

“I only came in for a beer—nothing else. I leave town in the morning.”

“I get it. No entanglements, right? But it’s just one dance. And judging by your accent, you aren’t from around here. So I’m willing to overlook the fact that you don’t know it’s an unwritten law that when that particular song comes on, it’s lady’s choice. She can ask any man to dance, and he can’t say no.”

“Can’t, huh? Is that a fact?” A playful grin toyed at the corners of his mouth.

“It is when you’re in Tuscaloosa, Alabama. That song’s a sacred anthem around here. So, cowboy, I’m asking you once again. You wanna dance?” She put one hand on her hip and extended the other toward him, waiting. Hoping he would acquiesce.

His hesitation surprised her. Instead of accepting immediately, he purposefully raked his eyes over her from head to toe.

“Go ahead. I’ve got all night.” She teased him at the flagrant assessment of her assets. She welcomed the appraisal. She knew she looked good tonight.

Finally he budged, putting both feet on the ground and taking a step closer. “All right then. You lead the way.” He smirked, as if amused by the whole incident.

She smiled and turned toward the wooden floor near the stage, their fingers joined behind her as they walked. When they were front and center, she put her hands on his shoulders while his immediately came to rest on her hips. Although it wasn’t a particularly slow song, he pulled her close until their bodies touched, and they began to move in time to the music.

He was tall and towered over her, despite her high heels, so he bent slightly and introduced himself. “I’m David. What’s your name?”

The feel of his warm breath against her face made the air around her crackle. She inhaled the scent of him. It was equal parts of shampoo, spice, and suds, and it was more intoxicating to her than the vodka had been. She breathed deeply then looked up into his brown eyes.

He raised an eyebrow in apparent surprise at the revelation. “That’s an unusual name for a girl. My best friend in high school was named Neil.”

“Cowboy, it may sound like a boy’s name, but I can assure you I am one-hundred-percent genuine woman.”

He let his hands wander over the luscious curve of her bottom. Pressing his lips against her ear, he dared her. “Prove it.”

Oh boy, what a good start. I think this one just got added to my 'to-buy' list, that ever expanding document.