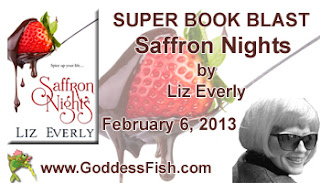 Liz will be awarding organic saffron and cedar bath gel and handmade soap to a randomly drawn commenter during the tour (US ONLY).

Now, without further ado, is Liz Everly, and Saffron Nights! 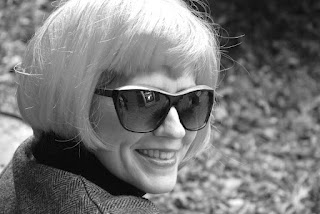 Liz Everly is a passionate cook, writer, and traveler. Exploring food and romance in Saffron Nights, Liz ombines her lifelong love of action-packed romance with her culinary expertise. She loves to interact with readers. Please follow her on Twitter @Lizeverly1, check out her website http://www.lizeverly.worpress.com. You can also find her on Facebook and blogging at http://www.ladysmut.com. 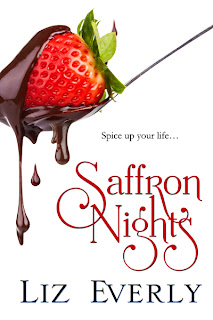 Wherever they travel, there’s an aphrodisiac waiting to whet their appetites…

Brazil…Hawaii…India….As a food writer, Maeve has just been handed the hottest opportunity of her career. She’s being sent on an international research tour for an aphrodisiac cookbook. The downside is that she has to travel with rock star photographer and womanizer Jackson Dodds. And the upside is that she has to travel with Jackson Dodds. Because once they meet, Maeve understands why he’s been named “America’s Most Eligible Bachelor”—and despite her best intentions, all she can think about is putting their arousing recipes to the test…

Sexy and talented, Jackson can have any woman he desires. But lately, the thrill is gone—until he lays eyes on Maeve, who exudes sensuality like no one else. She’s determined to keep things professional, but he knows the attraction is mutual. And as they travel the world, sampling warming saffron, juicy papaya, silky avocado, rare herbs and teas—and a mushroom whose very aroma sends women to heights of ecstasy—both discover a hunger they’ve never known, and don’t want to resist, even amid unexpected danger…

“Here’s something interesting.  In late Hellenistic Egypt, Cleopatra used saffron in her baths so lovemaking would be more pleasurable,” Maeve interrupted the quiet.

The word lovemaking caught his attention, swirled around in his mind for a moment. They had called a truce of a sort. But he couldn’t help but remember—it was just a few nights ago and she was sitting right next to him. Her lips parted, her head tilted, deep in thought. What was she thinking?

“Hmmm,” he said, though lovemaking was really the only word his ears picked up on.

She opened Chef’s book and leafed through its now even more ragged pages. “Part of saffron’s magical property is the enhancement of “lust.” Given that the medical findings show saffron as a substance capable of affecting the neurotransmitters, perhaps saffron may in fact be an aphrodisiac. Its ingestion is found to be a soothing relaxant capable of lowering blood pressure and stimulating the respiration. Perhaps, it could also contain properties that stimulate the libido and the erogenous zones. Some attest to its sexual properties that they believe is most effective when used by women. SB’s favorite. I assume SB was a woman.”

“I’m seeing a theme here, are you?” Jackson said.

“Yes, Chef was mostly interested in what the substances do to women,” she said and smiled.

“It does seem that way,” he managed to say, then went back to his computer screen. “Whoa,” he said. “Now this is interesting. The most a man paid to have Sasha for evening? Two and a half million dollars.”

Jackson whistled. “I wonder what makes her worth that.”

“She is beautiful,” Maeve said.

“Not as beautiful as y—”

“Maybe she has a special trick,” she said, placing finger quote in the air around “special trick.”

“More likely she fulfills a strange fetish or fantasy,” he said.

Maeve’s eyes caught his; she lifted her eyebrows. “What could that be? S & M? The world’s best blow job? What?”

Did she just say blow job? He had to concentrate not to cough up the water he just drank. He felt the heat rise to his face—and other parts of him.

She laughed. “Should I be insulted?”

As I promised, below are the links to other stops on the Book Blast. Please be sure to leave your e-mail address when you comment.