Welcome to the fourth book in the Granite Lake series, Wolf Tracks, featuring my favorite 'wolfie' TJ Lynus, and his coming of age story. You remember TJ; the sweet, handsome (and hot) younger brother of pack Alpha Keil. The slightly klutzy, but totally endearing and sexy man, who is so much more than he seems. It is the story of his meeting his mate, and the ironic twist that pops up when he discovers what her 'day job' is. 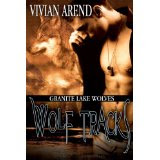 Score one for the underdog…er…wolf.

TJ Lynus is a legend in Granite Lake, both for his easygoing demeanor—and his clumsiness. His carefree acceptance of his lot vanishes, though, when his position as best man brings him face to face with someone he didn’t expect. His mate. His very human mate. Suddenly, one thing is crystal clear: if he intends to claim her, his usual laid-back attitude isn’t going to cut it.

After fulfilling her maid-of-honor duties, Pam Quinn has just enough time for a Yukon wilderness trip before returning south. The instant attraction between her and TJ tempts her to indulge in some Northern Delight, but when he drops the F-bomb—“forever”—she has second thoughts. In her world, true love is a fairy tale that seldom, if ever, comes true.

Okay, so maybe staging a kidnapping wasn't TJ’s best idea, but at least Pam has the good humor to agree to his deal. He’ll give her all the northern exposure she can stand—and she won’t break his kneecaps.
Now to convince her that fairy tales can remake her world—and that forever is worth fighting for.

By popular demand: Clumsy sidekick wolf grows up, sarcasm reigns, and the wilderness gets wilder. Includes hot nookie in places you expect—like a remote cabin—and places you don’t.

Vivian Arend’s Granite Lake Wolves series is that rare combination of romance, adventure, humor and screaming hot sex, all in one story. This is TJ’s story, and it is the perfect tale for him. TJ is the younger brother of the alpha of the Granite Lake Pack, and the one most likely to trip over his own feet. As a wolf, he is graceful and sure, but his human male is awkward and clumsy. My favorite description of TJ is that he’s like a beautiful Labrador puppy, all exuberance and energy, needing to grow into his massive paws. I love how he grows in this book, and gains the maturity to charm his mate. I have always had a soft spot for TJ, and it was good to see him grow into his promise of good things.

Pam is such a great mate for TJ. She is strong and independent, but she has a big heart and an open mind. The biggest joke in the story is Pam’s occupation: she works for the RCMP –as a dog trainer! I loved watching her hold her own against TJ, and she has a sassy way that just seems to charm everyone. Even when TJ “kidnaps” her for an adventure, she decides to make the best of the situation. And when these two are together, you can feel the heat rising between them. The relationship gets hot quickly, and just when you think it’s reached the peak, Ms Arend pushes the limits to heat it up even more.

I enjoyed seeing the rest of the Granite Lake pack, and getting a peek at what they had been up to, but this was TJ and Pam’s book, and it was worth the wait. I recommend this series to all the shifter fans that like some laughter with their romance. But wear something to protect your fingers-this one is a scorcher.
Posted by Nancy G at 2:00 AM