The Cowboy Rescues a Bride 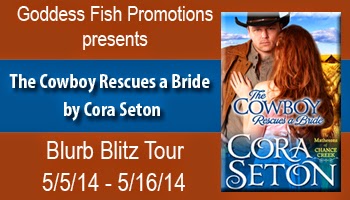 Today's post is for The Cowboy Rescues a Bride, (Cowboys of Chance Creek Vol. 7) by Cora Seton, a Contemporary Western Romance book available now from One Acre Press. As a Blurb Blitz, there is no guest post or interview, but I do have a blurb, excerpt and author bio for you. Cora will be awarding one randomly drawn commenter on the tour a $50 Amazon GC, so please leave your email when you comment. I will also post links to the other participating blogs for more chances to comment and win. 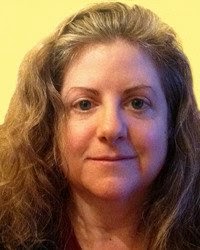 Cora Seton loves cowboys, country life, gardening, bike-riding, and lazing around with a good book. Mother of four, wife to a computer programmer/eco-farmer, she ditched her California lifestyle nine years ago and moved to a remote logging town in northwestern British Columbia.
Like the characters in her novels, Cora enjoys old-fashioned pursuits and modern technology, spending mornings transforming a neglected one-acre lot into a paradise of orchards, berry bushes and market gardens, and afternoons writing the latest Chance Creek romance novel on her iPad mini. Visit www.coraseton.com to read about new releases, contests and other cool events! 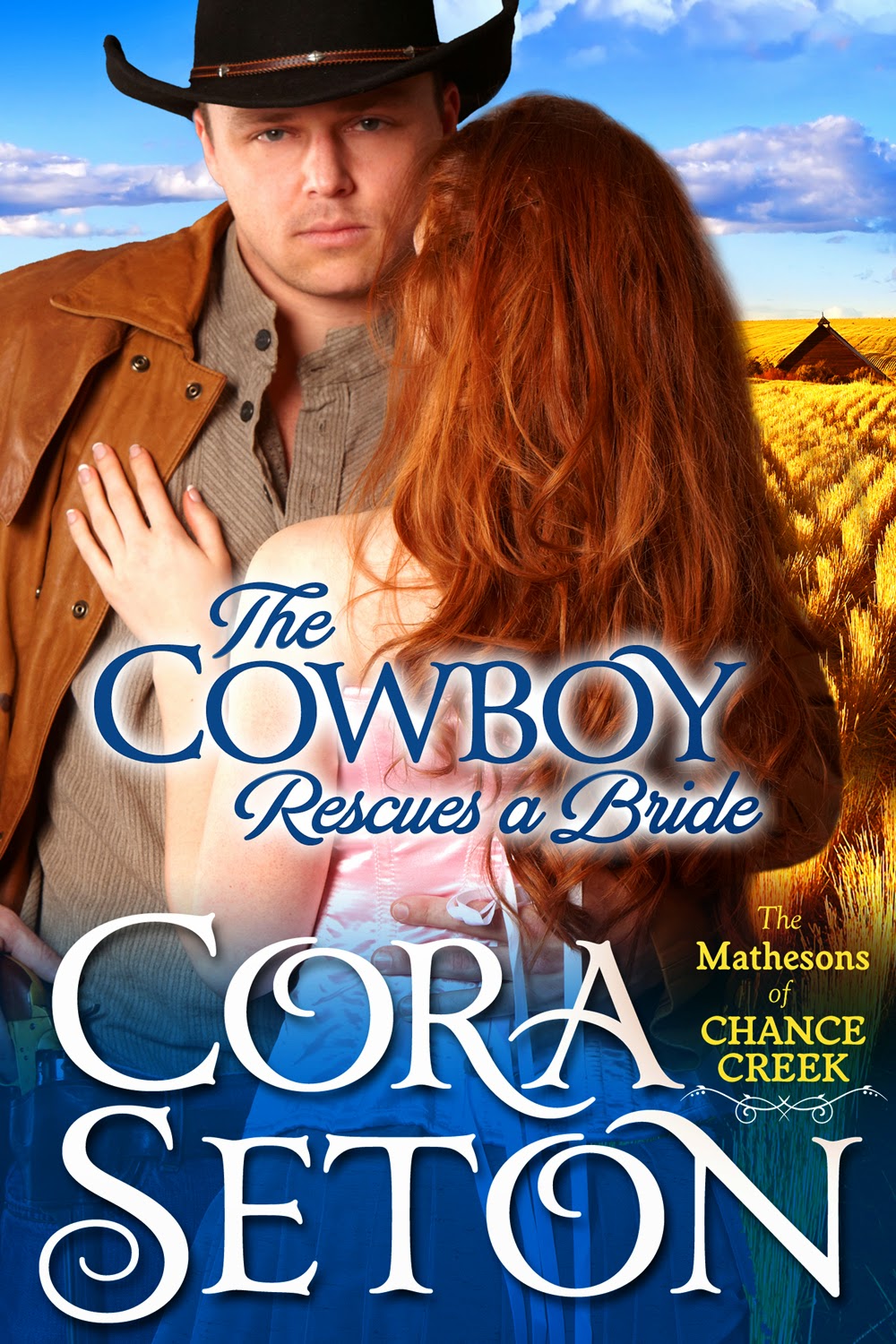 Blurb for The Cowboy Rescues a Bride

Ned Matheson knows Fila Sahar has been to hell and back. Born in Connecticut, but captured by Taliban extremists when her family returned to Afghanistan to attend a funeral, she spent ten years in captivity and lost the parents she loved. Back on United States soil she’s finally safe in his care on the Double-Bar-K, but hemmed in by her fears, she might as well be a prisoner again. Ned knows he has to help her regain her self-confidence before they can date, let alone marry. Good thing he’s found the perfect solution.

Fila cares for Ned more than she can say, and she’s grateful for the home he’s given her on his family’s ranch, but before she can give her heart to any man, she has to find the courage to reenter society. When Ned surprises her with his perfect solution—the restaurant he’s leased and renovated in her name—she doesn’t know how to tell him she can’t imagine being brave enough to ever run it. So when Ned’s father sends him out of town to check on the family’s remote hunting cabin, she’s grateful for the delay.

Ned knows his father wants to split him and Fila up, so there’s no way he’s leaving town without taking her along. But when they reach the cabin, a savage twist of fate will turn the tables on both of them. Ned will learn what it’s like to be helpless. Fila will have to find the courage she lost years ago.

Can they survive the weekend? Or will this trip be their last?

Excerpt from The Cowboy Rescues a Bride

Fila turned around in a circle. “What is it?”

“It’s your restaurant.” Ned took her hands in his. This was his moment. This was when Fila would realize how he felt about her—what he’d do to make her happy. “I paid the first six months’ rent out of my savings and I have more to use for your startup costs. Everyone helped out. Ethan made the sign out front—I’ll turn on the floodlights and you’ll see it when we go out again.  Jake made the tables and booths. The ladies painted and decorated. Everyone pitched in one way or the other.”

She stood stock still as he listed the names of everyone who’d lent a hand. He hoped Fila understood that she was surrounded by people that cared for her and they all wanted to help her succeed. “We called it Fila’s.” He squeezed her hands. “You know there isn’t anything I wouldn’t do for you, don’t you? I want for you to feel like Chance Creek is your home—like you have a place here. Everyone wants you to feel that way. What do you think? Do you love it?”

Fila still didn’t move, and the unease that had been growing within him since they’d arrived at DelMonaco’s surged up a notch. Fila stood as still as a statue—

Except for the tear that slid down her cheek.

She drew in a shaky breath. In fact she was trembling all over.

“Fila? Sweetheart?” He dropped his voice so the others wouldn’t hear.

Her gaze flashed to his at the endearment. Her eyes were wide, her lips parted. Tears snaked down her cheeks silently. Was that fear in her eyes? As Autumn and Rose raced to comfort her, the truth of it was a cold, hard slap to the face.

She wasn’t in love with him, either.

Why would she be? He was a rough and tumble cowboy. A fighter.

Ned dropped her hands and backed away until he felt the handle of the door at his back. He was always blowing it. He was good for nothing. Hell, he’d scared the woman he loved. Filled with self-loathing, he yanked the door open, rushed through it and slammed it behind him. Outside, he paced in circles on the sidewalk, his anger only spiraling higher. He was such an idiot—a God-damned idiot. How could he make such a mistake?

The door opened behind him and Jake strode out. “It isn’t your fault and it’s not over,” he said.

“I saw a girl who’s trying to put her life back together. I saw someone who’s overwhelmed in the moment, but like you always say, she’s a fighter. She’ll pull through. Give her time to get used to the idea and I just know she’ll come to love it.”

“She’ll never love it if you don’t get back in there and show her why she should.”

Ned came to a halt. What the hell did that mean?

“Get back inside,” Jake told him, pulling the door open again. “Get yourself under control and give her the grand tour.”

May 5: Queentutt's World of Escapism
May 5: Harps Romance Book Review
May 6: Romance Novel Giveaways
May 7: Andi's Book Reviews
May 8: Christine Young author
May 8: Let's Get BOOKED!
May 9: Rachel Brimble Romance
May 12: My Odd Little World
May 13: Booklover Sue
May 14: Ye Olde Inkwell
May 15: Musings and Ramblings
May 16: Susana's Morning Room
Posted by Nancy G at 10:03 AM