Get 'All Fired Up' with Vivian Arend and Elle Kennedy 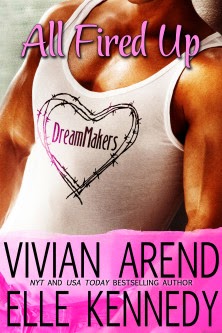 All Fired Up (DreamMakers #1)
By: Vivian Arend & Elle Kennedy

Welcome to the DreamMakers trilogy. A new collaboration from New York Times and USA Today bestselling author Vivian Arend and Elle Kennedy, author of the bestselling Out of Uniform and Killer Instincts series.

What are three ex-military best friends supposed to do when they’re back on US soil permanently? Parker Wilson, Jack Hunter and Dean Colter considered establishing the typical security company, but a glut on the market forced a change of plans.

After listening to a friend bemoan not knowing what to do for his girlfriend’s birthday, they realized their set of job skills left them uniquely positioned to assist the confused male masses. Any idiot can plan a perfect date if he knows his woman well enough. And anyone with recon skills can fill in the missing gaps.

DREAMMAKERS: HELPING YOU WIN THE BATTLE FOR HER HEART
Got an event coming up with that special someone? Looking to make a first impression guaranteed to move you to the top of her dating list? Or…god forbid…did you forget her birthday and need to make up some serious cred? Let us help you.

As guys, we understand how difficult it can be to figure out what a woman wants. We offer reasonable rates for fantasy dates coordinated for you and your partner. Can be pre-arranged up to three months in advance, or a minimum of one hour (emergency services–check for availability, extra charges apply.)

A fun thrill ride of hot sex and sweet emotion. Vivian Arend and Elle Kennedy held me spellbound with the escapades of these three exciting alpha males who know their way around a woman’s body—and her heart. I can’t wait to read more!
~ Jaci Burton, New York Times Bestselling Author

Blurb for All Fired Up

He’s ready to lead the way
Parker Wilson never thought he’d go from battle-hardened soldier to romance expert, but after his stint in the Rangers, that’s exactly what happened. As the owner of DreamMakers Inc., he helps other men win in the love department, using every resource available to plan the perfect date. When a routine recon turns into an unexpected night of passion, Parker’s mission becomes more personal—and he won’t give up until Lynn Davidson is all his.
She’s more than willing to follow
Lynn is a goner from the moment she lays eyes on the delectable Parker. She’s just ditched her boring almost-boyfriend and is tired of sticking to the straight and narrow. It’s time to walk on the wild side, and what better way than in the arms of the most irresistible man she’s ever met? But when their red-hot affair is threatened, it’ll take a team effort to make their dreams come true.

Buy Links:
Amazon | Barnes & Noble | Kobo | iTunes | All Romance eBooks
*Please note, these links will be directed to Viv’s website until buy links are available. At that time, they will link automatically to the proper eRetailer.* 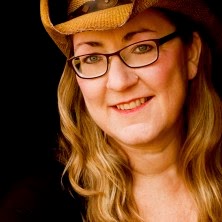 Vivian Arend in one word: Adventurous. In a sentence: Willing to try just about anything once. That wide-eyed attitude has taken her around North America, through parts of Europe, and into Central and South America, often with no running water.

Her optimistic outlook also meant that when challenged to write a book, she gave it a shot, and discovered creating worlds to play in was nearly as addictive as traveling the real one.  Now a New York Times and USA Today bestselling author of both contemporary and paranormal stories, Vivian continues to explore, write and otherwise keep herself well entertained.

A RITA-award nominated author, Elle Kennedy grew up in the suburbs of Toronto, Ontario, and holds a B.A. in English from York University. From an early age, she knew she wanted to be a writer, and actively began pursuing that dream when she was a teenager.

My Review of All Fired Up

When Dreammakers are hired to create the perfect proposal date, with only four days to set it all up, they say no problem. That is, until they talk to the prospective groom, and he seems to know absolutely nothing about the woman he claims to love. So, with their work cut out for them, Parker Wilson and Dean Colter do what they do best: covert operations and undercover action. When Parker goes to the target's yoga class, he is stunned to find himself strongly attracted to the woman he is observing. In spite of the attraction, he completes his mission and gathers information. Lynn Davidson is gorgeous, funny and oh so sexy, he can't believe she is involved with their clueless client, but he will complete the job and move on.

When Parker and Dean continue their surveillance the next evening, they discover that Lynn is celebrating with her best friend Suz over drinks. Celebrating dumping her cheat of a boyfriend, the very same boyfriend that hired them to create the dream date. Over tequila and limes, Lynn decides to live for herself, and goes home with Parker and Dean for a night of unbelievably hot and sexy action. Now all Parker has to do is find a way to reveal the truth to Lynn before everything blows up in his face. Throw in one slightly psychotic ex who will do just about anything to get what he wants, and this is a disaster in the making for Lynn and Parker.


What can I say about All Fired Up? That it has hot, alpha heroes (it does), that there is a sassy heroine (with courage and spirit) some intrigue (both good and not so good) and lots of scorching hot sex (oh boy is there ever!) and a love connection between two people who deserve a happy ever after (yeah, they really do).

All Fired Up is the first of a trilogy of stories about The Dreammakers. I like this world created by Vivian Arend and Elle Kennedy, a world with charismatic  and interesting characters, exciting and passionate story lines. I was drawn to these people from the first page, and got lost in the world of passion and fun these authors brought to life.

I love the chemistry between Lynn and Parker, it is charged with sexual energy and passion that leaps off the page at you every time they are near each other. I liked that the authors created two very similar individuals in Suz and Dean, characters that can (and do) live life full out, no holds barred. I knew these two would end up friends, not lovers, and that worked for me too.

The sneakiness of Lynn's ex, Phil, has just the right touch of psychosis to it, adding the edge of danger needed to bring the Ranger out in Parker, and yet he was only part of the rescue, because Lynn was able to mostly save herself. There is a strength in Lynn, and she comes out with the man she wants.

I look forward to the next book in this series, especially after the tease at the end of this one, featuring Pepper Wilson, Parker's sister. I give this one five kisses, and have already recommended this to many friends...and have read it three times!