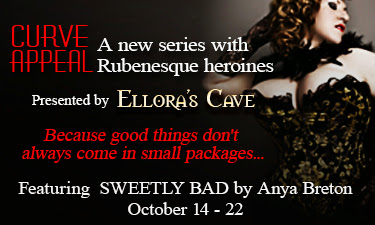 As a BBW myself, I love stories with more realistic sized women...after all, skinny doesn't hold the patent on love, we all want that special someone in our lives. Now, thanks to Anya Breton and Ellora's Cave, there are new books with Curve Appeal, featuring big Beautiful Women and the men who love them. No excerpt for this one, but there is a brief synopsis, and there will be a digital copy of this one for one random commenter on today's post. Please be sure to leave an e-mail address when you comment so I know where to send it. Let yours friends know about it, using this Twitter hashtag to promote this post, the series and tour: #ECLOVESCURVES

Sweetly Bad is available on Amazon.com, BN.com, and ellorascave.com. 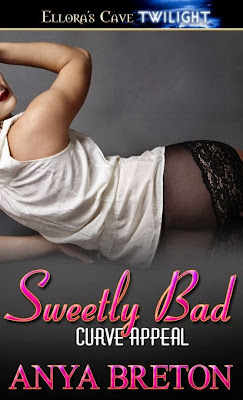 QUICK DETAILS: In Sweetly Bad, hot and explicit sex with the right (plus-sized) woman just might redeem this book's paranormal bad boy hero. This eBook is the first selection in Curve Appeal, a new series by Ellora's Cave that celebrates big, beautiful women and the partners who love them.

SYNOPSIS: Drew couldn’t imagine anything worse than being stranded in a two-cellular-bar town with a broken-down Ferrari…until his mother—his own mother!—marked him as a rogue Air witch and canceled all his credit cards. Now he’s kill-on-sight in the Underground, and the only person willing to help him is the curvy human mechanic who towed his car. A strangely delectable curvy human mechanic…The last thing Erica needs is a yuppie playboy freeloading in her garage. Still, she can’t bring herself to turn Drew out into the sultry heat, even if he is a bit of an ass. A gorgeous, incorrigible, everything-your-mother-warned-you-against ass. Soon the heat isn’t the only thing sultry in the garage and self-control is the last thing on her mind. They agree to a one-night stand, but Drew’s magical secrets are dangerous—and catching up to him fast.

As Drew calls woman after woman for assistance once he has cell coverage, it becomes clear to Erica that he is a major player, but she is determined to help him, because the fees for the work will keep her little garage afloat for a long time. That is, if she can discover why all the repairs she's done recently seem to be going bad. She is determined not to sell out to her nasty ex, Jared, but isn't sure just how. And when Drew discovers what his mother has done to teach him a lesson, he realizes two things: he is on his own, with the threat of death hanging over his head, and Erica is in danger, not only from those magicals after him, but from her vicious ex, Jared, who will do anything to sabotage Erica's garage.

I really enjoyed this story. Erica is a strong woman, and she is determined to succeed with her business. She wants to see the good in everyone, even her awful ex, but even she has an eventual epiphany when Drew convinces her about Jared. She is also determined not to become another notch on Drew's considerable, if metaphorical, bedpost. Yes, she wants him, but on her terms, not his. Too bad her heart didn't follow the program, as she eventually falls for the man she finds under the spoiled and pampered exterior.

Once Drew pulls his head out of his posterior, he discovers that he needs to stop being the Witch version of a man whore, and take responsibility for his actions. I really enjoyed watching as Drew finally grew up into the man he was meant to be, and learned that only when love is given freely, with no strings, can it end up as the treasure it really is.

Do Erica and Drew find a happily ever after, as well as a screaming hot and passionate love life? Yes, but they find even more, they find friendship along with the heat, as they face the big challenges together, head on.