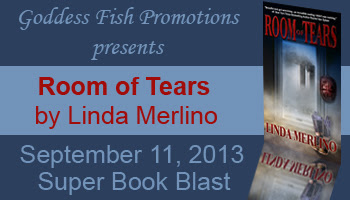 Today is the Super Book Blast for Linda Merlino's Room of Tears, a suspense book available now from Imajin Books. As a Book Blast, there will be no interview or blog post today. I will be posting an author bio, blurb and excerpt for your enjoyment. Linda will be awarding a $25 Amazon or BN.com gift card each to two randomly drawn commenters during the tour. I will post links to the participating blogs to help you increase your chances to win, so please leave your e-mail address when you comment. This is a Rafflecopter contest, so please use the form. 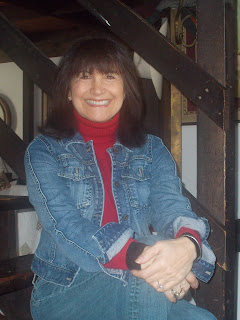 Linda Merlino is the author of  Room of Tears (July 23 2013), Hudson Catalina (2008-Belly of the Whale & re-release 9/14/12), Swan Boat Souvenir (self-published 2003) she began writing fiction as a young mother on the sidelines of endless soccer practices.  Linda wrote anytime any place.  A manuscript filled a carton in the back seat of her car.  Many years have passed since those early beginnings, but her work continues to be inspired by her children.

The author has a fascination with heroes and writes her fiction to honor ordinary men and women who react unselfishly in extraordinary circumstances.  She extends her gratitude to all who keep us safe and free.

Her hometown is outside of Boston.  She lived for many years in New York City and more recently calls Connecticut her home. 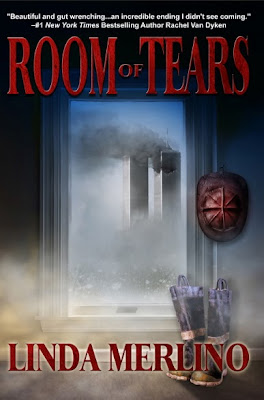 Blurb for Room of Tears

Out of tragedies come heroes and miracles…

At 9:59 a.m. on September 11, 2001, Diane O’Connor’s life as a firefighter’s wife changes forever, shattering her faith. Four decades later, a note still hangs on her kitchen cabinet in Queens, the paper yellowed with age. Diane knows the scribbled sentences by heart; she'd left them the morning of 9/11 for her husband, Billy.

In the summer of 2041, Diane invites Friar Antonio Ortiz to her home. He is a man destined to become counsel to the first American pope—her son, Peter. Antonio asks no questions and arrives in secret, promising to wait nineteen years before passing Diane's journal to Peter. Only then will Billy’s story be told, along with answers to Peter’s questions about his father’s last days.

Excerpt from Room of Tears

Absorbed, Antonio neglected to notice that Diane had disappeared into the kitchen. He thought to ask her about the two men in the photographs, and when he turned in anticipation of seeing her next to him, he took a step toward where she might be standing. His right foot struck a pair of boots propped upright against the wall. He stumbled and put a hand out to that empty place where he thought she might be, but his face did not meet hers, and instead came within an inch of a firefighter’s helmet, the medallion of its FDNY ladder company polished and gleaming.

On the edge of that moment, trying to regain his balance, each breath he took tightened in his throat. Antonio began to gag. His mind raced. What could be happening? One minute he was looking at photographs and the next his throat was constricting. An acrid odor rose to his nostrils. He shook his head—the same faint smell he’d noticed from before, at the door, but stronger, sharp enough now to sear his soft membranes. My God, he thought and recoiled. Sweat sprang from his face and neck. A heart attack? He clutched his chest. No, not that. His heart was fine except for the galloping beat under his ribcage. Heat emanated from the helmet as if it had just come through an inferno. “My God,” he said aloud. Perhaps a fire burned inside the wall, hot enough to choke him.

This one has sure caught my attention...I sense a shopping trip in my on line future.