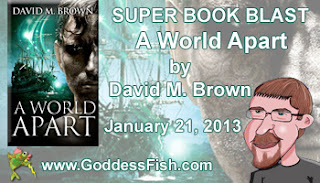 Today's Super Book Blast features A World Apart, a Fantasy novel currently available. No interviews or blog posts with this, it is a quick look at this book, with a blurb and excerpt to pique your interest. David will be awarding one random commenter on the tour a $25 Amazon GC. Please be sure to leave your e-mail address when you comment, and I'll post links to the other stops on the tour for more chances to enter. 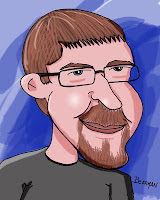 David Brown could be considered a fantasy fanatic, especially since he has spent the last 10 years developing a 47,000 year history for his fictional world of Elenchera. When converting his obsession into literary form, David commits himself to a rigorous writing and editing process before his work can meet his approval. Combined with the critical eye of his wife and a BA Hons in History and English, David's dedication leads him to his goal of inspiring readers through heartfelt stories and characters.

Although David is inspired primarily by fantasy fiction, he also finds his muse in the form of anime, world cinema, history, and biographies. His own books, Fezariu's Epiphany and A World Apart, and the in-progress Ansel's Remorse and The Stars Beneath the Parapets combine aspects from the worlds both old and new into compelling tales of a world not soon forgotten. David himself does not lack a spirit of adventure; in fact, he left his job in 2007 in order to spend a month travelling. Second only to meeting and marrying his wife, David counts this as one of the most amazing experiences of his life. Demetrius makes his first mistake when he lets his best friend Halcyon marry Eleyna, the love of his life, without saying a word. On the day of the wedding, he walks away from the Elencheran town of Dove's Meadow and joins the army.

He makes his second mistake when the pirate Black Iris tricks him into letting dozens of men, women and children die in a fire. Demetrius is imprisoned in grief and disgrace.

But he can atone. The Black Iris is dead. The Ivory Rose has risen to the top of the pirates and is leading brutal raids on the coast. If Demetrius can capture and kill her, he'll win his pardon.

And then Demetrius discovers the Ivory Rose is Eleyna. He must decide which will be his third mistake: losing his last chance at a pardon or destroying the one woman he's ever loved.

Demetrius made no response, he was lost in a battle all of his own making now. The challenge of Halcyon was forgotten, he had overcome that, but he now had to succeed in a new struggle – to be a soldier. Demetrius had decided to turn his back on the shepherd life that his father desperately wanted for him in favour of following and emulating his grandfather. Deep down, Demetrius hoped that if he made his grandfather proud then Granicus would reveal the most sought after secret in all of Dove’s Meadow – why Granicus had chosen not to join the Order and bring untold fame to the town.

Demetrius heard another rumble of thunder and between the Green and Pirels Mountains he saw lightning strike briefly. His clothes were now sodden and his feet were uncomfortable in his shoes but Demetrius was beyond such constraints. Dove’s Meadow didn’t feel like it was just below him to the left.

Instead, it was almost as if just the narrow walk along the perimeter wall existed and that losing his balance either way would see him fall into a void of nothingness. Everything hinged on Demetrius’ continued steps.

Granicus had once told Demetrius of one of the rebellions he had fought when he was in the army. The rebels had lined up to take on the might of the Himordian army on a sodden battlefield with rain, thunder and lightning doing nothing to turn any man or woman from the conflict. Demetrius imagined he was in that moment now, facing the same dangers that his grandfather had faced.

As I promised earlier, below are the other blogs on today's Super Book Blast. The more you post, the better your chances at winning.