Hero At Large: a Romantic Comedy by Janet Evanovich 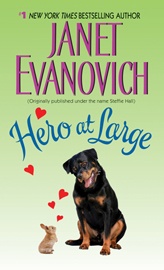 Hero At Large
By Janet Evanovich
He cooks a pot holder in the spaghetti sauce and needs lessons on making Jell-O. Still, single mom and ice skating coach Chris Nelson is committed to keeping her sexy, scruffy, new "house husband" around. After all, she did break his arm...and his toe...and she can't just turn him out into the cold...
It seemed like luck when this gorgeous stranger first stopped to help Chris with her car, but suddenly her peaceful life turns topsy-turvy as tender, long-suffering Ken Callahan enlists the sympathies of her 7-year-old daughter and her meddlesome Aunt Edna. And even Chris can't deny the excitement his magnetic blue-black eyes spark deep within her...But who is he?
Before there was Stephanie Plum, there were some wickedly funny, wonderfully sweet romantic comedies. The earlier works of Janet Evanovich have been spiffed up and rereleased, and I am very happy about it. The comedy of errors that brings Chris and Ken together is terrific. There are characters in this that remind me of those later brought into the Stephanie Plum books, but these people are much more fun because the seem real to you. Ken Callahan is that rare beast-a man who is willing to laugh at himself and life around him. But he isn't averse to using what fate hands him to get what he wants. And what he wants, ultimately, is Chris. But he does it all wrong, at least as far as she is concerned.
Chris has been busy raising her daughter alone, after being burned in the romance department. She thought she found true love but instead learned the hard way that an egocentric and vain actor with a penchant for lying doesn't make good husband material. When Ken falls into her life, almost literally, she thinks he is too good to be true. Aunt Edna does whatever she can to try and get these two together, and Ken is certainly willing. But when Chris finds out that Ken isn't what he seems to be, it looks like any chance for a happily ever after for these two is gone.
I love the verbal sparring between Chris and Ken, and as he tries to wear her down and get her on his side, I really enjoy her rationalization about him. I like that Ms. Evanovich has not used the "conventional" woman for her heroine, but opted for a championship caliber ice skater turned coach for her lead. This shows the determination in Chris to persevere in her chosen arena. And Ken is such a pussycat, and a wonderful and supportive man. The miscues between them just ratchet the sexual tension higher until something has to give. That first encounter is worth the wait. This is a story of "love conquers all/love heals all" and I heartily recommend it to one and all.