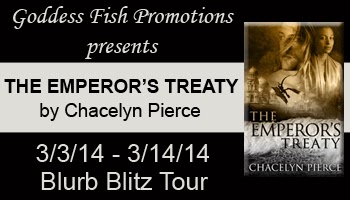 Today's post is a Super Blurb Blitz for The Emperor's Treaty, a Fantasy Romance book available now. As a blurb blitz, there will be no interview or guest post, but I will post a brief bio of the author, Chacelyn Pierce, along with a blurb and excerpt. I will also post links to the other stops along the tour, so please leave your e-mail address when you comment. Chacelyn will be awarding a $15 Starbucks GC and free digital copy of The Emperor's Treaty to a randomly drawn commenter during the tour. 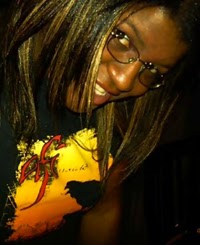 A rocker by heart, Chacelyn Pierce is constantly ear plugged with heavy tunes blaring to stir up the phantom personalities that swarm her mind. It’s no surprise that she enjoys writing and reading to satiate her appetite for the male antagonist in a story. Married to a blatant redhead and mothering a diva, there is never a dull moment in the house. As a native Texan, she doesn't personally own a horse but follows the unwritten southern rule of knowing how to ride one. When she’s not testing the emotional capacity of her characters, she works as a dog groomer. 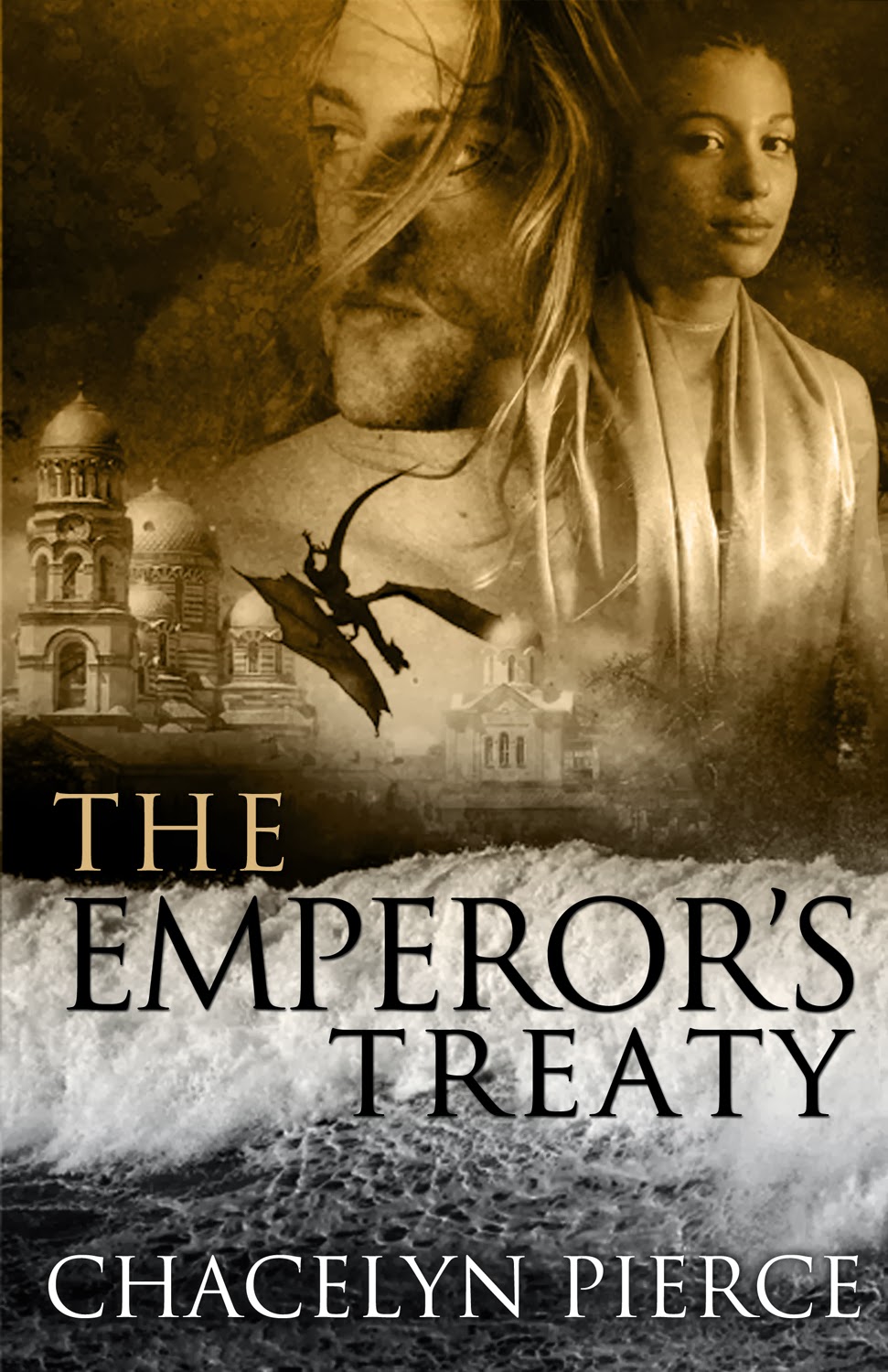 Blurb for The Emperor's Treaty

The Emperor's Treaty (The Calaeron Duology, #1) Arryn, the newly crowned Emperor of New Phalba, must find a means to strengthen his kingdoms from impending foes. To end a blood war that has carried over millenniums, he petitions to marry one of his race’s mortal enemy—the Moekan dragons’ crowned princess. Even though the bond with the Moekan dragons will aid against a looming attack on his empire, Arryn can’t help his attraction to the dragon princess Shann living in his palace.

Eager to make the best of her situation and please her new husband, Shann is willing to face the challenges of a dragon ruling the Fae Empire. Winning his trust proves to be a tougher challenge with odds stacked against her. Will the lies about her cause Arryn to break the new peace treaty? And can she stop him from starting a war that will change everyone's future?

Excerpt from The Emperor's Treaty

Arryn tilted his head back in fatigue, he'd been slaying the mammoth dragons night and day, and he hated it. But no prince ever sat aside for battle. It was tradition for him to participate in skirmishes that would be renowned through the ages. Nevertheless, glory left him barely able to stand on two feet. All for blood and exaltation; no time to frown or complain about the lack of rest. His father's words echoed though his exhausted mind and filled him with enough strength to finish the task at hand.

He gazed up at the dreary sky, noting the stirring winter firmaments. The soft morning light peered over the Jertan city ruins, casting a somber glow on a once-mystical place. It would seem beautiful, if not for the chaos and bloodshed that had befallen the crumbling silver spires of the ancient Jertan castle.

The mourning cries and pleas of fallen Phalban soldiers resonated through the gorge. The ditch his men had dug around the cloister became a pit of pain. The injured were carried there to seek aid, but he was certain it would be filled in with dirt and marked as a mass grave before sunset. He glanced around, looking for some shred of peace or happiness in the madness. His father spoke of war as if it were a prized stag on a wall of gold. He did not see it as such. No matter how many times he willed his mind to focus on something else, it was always brought back to the horrific battlefield. Broken bodies of his kin were scattered around like debris. Many pleaded for their brothers to end their misery and give last testaments to their family. It was heart-wrenching…and unnecessary.