Flesh and Feathers and a Dynamic Duo of Authors 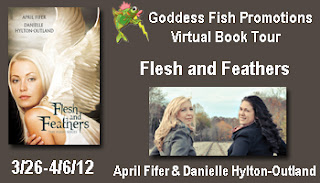 Today, I am delighted to welcome a pair of lovely ladies to My Odd Little World, April Fifer and Danielle Hylton-Outland, authors of Flesh and Feathers. Their book is an urban fantasy paranormal romance-what a mouthful. But from the blurb and excerpt it sounds like an intriguing book, and I look forward to reading this one.

The authors will be giving away an autographed bookmark and $5 Amazon GC to one commenter at every stop, and one $15 and one $25 Amazon.com gift certificate to two randomly drawn commenters during the tour.
Before I start the interview, lets find out a bit about the authors.

Danielle Hylton-Outland was raised in Virginia. She grew up having a huge appetite for daydreaming; always wanting to live in the spectacular worlds she created in her mind. She now lives with her husband and dog where she is pursuing a degree in literature. Danielle is a strong animal activist. She is currently co-writing the second book in The Flesh Series, "Flesh and Flames".

April Fifer grew up in a small town in Virginia, where it was common practice believing that dreams could only be found in stories. At the age of seven she was diagnosed with dyslexia. She was told that she would struggle through life and would never pick up a book to read for pleasure. Although school was hard, she was able to find her way with the help of two teachers who taught her self-discovery. Ignoring what she was taught growing up, she turned it around and found that your dreams could become stories.
http://fiferhylton.blogspot.com/
www.fiferhylton.com
https://twitter.com/#!/FiferHylton
http://www.facebook.com/pages/Flesh-and-Feathers/149542115115597
Now, for all those "inquiring minds" out there, I give you April and Danielle

Blurb:
Azaleigh’s life was simple. Then she meets Kale and Gage, two very different and charming men – one she loves and the other she cannot live without. As she struggles with her feelings towards them both, she begins to realize they are hiding a secret – and to her surprise they are not the only ones. Soon after, Azaleigh finds herself running for her life from a bounty hunter that is far from human, and with every narrow escape, she begins to unlock the secret that will change her life forever. In a world of good and evil, angel and fallen, Azaleigh must choose between fate or the one she loves. What do you do when hell won’t let you win and evil just won’t die?
Excerpt for Flesh and Feathers
“Go to hell!” I shouted as I began walking hard steps down the alley that would lead to the city sidewalk.
“Azaleigh!” he shouted, grabbing my arm and spinning me around to face him.
My only reaction was to slap him hard across his face. The loud sound of my hand making contact with his cheek shocked me, but I was too angry to care. “No! You don’t understand! You don’t ever get to touch me again!”
I shrugged harshly out of his grip. Just then, a heavy gust blew, ruffling my hair and blinding me as I turned to walk away, followed by a loud thud. Taking a step forward, I brushed my hair from my face, but then stopped suddenly. A man wearing a white hooded cloak stood in front of me. At first I stopped because I was astonished by what he was wearing, but as I studied him, I noticed the slender sword-like object that he gradually pulled from his side. My body began to tremble with fear.
“Azaleigh, get behind me!” Kale demanded in a firm voice.
Before I had a chance to respond, the man started running towards us. I felt Kale’s arm wrap around my waist. He held me tight to his body, and I could feel something begin to rumble inside him.
~~~~~~~~~~~~~
Thank you Danielle and April, for visiting My Odd Little World. Remember, everyone, The authors will be giving away an autographed bookmark and $5 Amazon GC to one commenter at every stop, and one $15 and one $25 Amazon.com gift certificate to two randomly drawn commenters during the tour. Be sure to leave a comment and your email address.
Posted by Nancy G at 12:01 AM