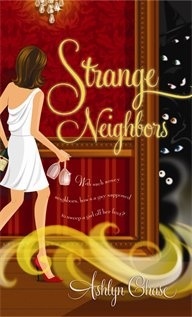 Blurb: When all-star pitcher and shapeshifter Jason Falco buys a small apartment building, he sees it not only as an investment, but as a place to escape the demands of major league baseball. That is, until he meets his tenants! A vigilante vampire: a wereraven with a morbid sense of humor; a werewolf thief who poses as a security expert; and two witches who work as phone sex actresses and own an owl familiar. Not to mention a beautiful, all too human nurse who gets Jason's blood pumping overtime.

With all the hooting, howling and hollering going on, how can an All-American guy get some peace and sweep a girl off her feet?

First, I have to be honest and say up front that I offered to help out a friend who was supposed to review this, but family problems got in her way. Having given my disclaimer up front, I have to tell you this was without a doubt one of the most enjoyable reading experiences I’ve had in a while.

I started this not knowing what to expect, and was delighted to find a story rich in humor, suspense and lots of steamy romance. The characters are all marvelous: main characters Merry and Jason are the picture of young love, progressing quickly to the next step. Like all new relationships, there are some rocky stretches, but unlike typical people, Jason has a secret-when he gets stressed, he shifts to his alternate form. Considering his high profile job and lifestyle, this could prove disastrous for him. And Merry learns something about her birth parents that could strain things even more. The secondary characters are wonderful, too. There are the witches, Morgaine and Gwyneth, who earn their living as telephone psychics and sex phone actresses; Nathan the morgue attendant who is a wereraven; Konrad the werewolf, and Chad the ghost, who wants his murder solved. Then of course, there are Jason’s Uncle Ralph and Aunt Dottie for comedy relief. Aunt Dottie is the only “normal” being in the building, and she is the typical busybody, snooping on everyone, and fearing the worst around each corner. The irony of that is that she and Ralph have been married about thirty years, and she has no idea about Ralph’s second nature.

I loved the mixture of dialog, discourse and thoughts, with the characters second-guessing themselves at major points. Aunt Dottie is a delight; all of her thoughts seem to center around how no one appreciates her efforts, while Jason and Merry seem to be worrying what the other one is thinking or feeling at a given moment, with all the insecurities of a new relationship. Add to that the stalking by the alcoholic paparazzi who needs a big story to save her career, and decides to make life hell for Jason and Merry: and of course the investigation into who murdered Chad back in the sixties, and you get a wonderfully wacky, fully entertaining romantic romp, filled with marvelous characters and passionate romance.

After looking at Ms. Chase’s website, I was delighted to see that this will be a series. I will be watching for more of these, and I hope they come soon.

Email ThisBlogThis!Share to TwitterShare to FacebookShare to Pinterest
Labels: review